Harry Hopkins: FDR’s Envoy to Churchill and Stalin by Christopher D. O’Sullivan
Requirements: .ePUB reader, 5.1 MB
Overview: One of the most controversial figures of the New Deal Era, Harry Hopkins elicited few neutral responses from his contemporaries. Millions admired him and believed the New Deal agencies he headed had rescued them from despair, but many of President Roosevelt’s enemies passionately hated him and derisively called him the “world’s greatest spender” or FDR’s “left-wing Rasputin.”

Hopkins was a paradoxical man: a trained social worker who enjoyed the company of the “swells,” attending cocktail parties, and gambling at the track. Once the quintessential New Dealer, during World War II he single-mindedly devoted himself to aiding the allies, downplaying his previous commitment to social reform and rupturing his friendship with Eleanor Roosevelt, among others. He was sickly and underweight, yet a profane and blunt-spoken man, lacking in any outward affectations of charisma. Still, FDR curiously saw Hopkins, who moved into the White House on the very day that Germany invaded France in May 1940, as his most suitable successor, the New Deal’s legatee, a possible Democratic nominee for president.

Much of what FDR accomplished would never have been possible without Hopkins—whom the press described as not only FDR’s most trusted official, but also his most intimate personal friend. Analyzing Hopkins’ role in wartime diplomacy and his personal relationships with the twentieth-century’s most indispensable leaders, historian Christopher O’Sullivan offers enormous insight into the most controversial aspects of FDR’s foreign policy, the New Deal Era, and the beginning of modern American history.
Genre: Non-Fiction > Biographies & Memoirs 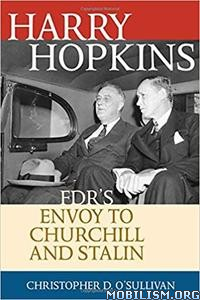