Dinosaur Destinations: Finding America’s Best Dinosaur Dig Sites, Museums and Exhibits by Jon Kramer, Julie Martinez (Illustrator), Vernon Morris (Illustrator)
Requirements: .ePUB reader, 33 MB
Overview: When it comes to dinosaurs and other fascinating fossils, the U.S. has it all, from Tyrannosaurus rex and Triceratops to Stegosaurus and Brachiosaurus. Dinosaur Destinations, by Jon Kramer, Julie Martinez, and Vernon Morris, will help you find the best dinosaur sites near you and across the country. Visit a dinosaur dig site or a famous dinosaur track site—and even make your own cast of fossilized tracks! With details about the nation’s best dinosaur-related locales, you’ll learn what fossils have been found at or near each place, what kids will enjoy about each site, contact information and more. Plus, this field guide to extinct creatures introduces each species and includes their former range maps and fun facts.
Genre: Non-Fiction > General Legend of the Free State of Jones by Rudy H. Leverett
Requirements: .ePUB reader, 6 MB
Overview: The original, full accounting of a rebellion in the Heart of Dixie. A maverick, unionist district in the heart of the Old South? A notorious county that seceded from the Confederacy? This is how Jones County, Mississippi, is known in myth and legend. Since 1864 the legend has persisted. Differing versions give the name of this new nation as Republic of Jones, Jones County Confederacy, and Free State of Jones. Over the years this story has captured the imaginations of journalists, historians, essayists, novelists, short story writers, and Hollywood film makers, although serious scholars long ago questioned the accuracy of local history accounts about a secessionist county led by Newt Knight and a band of renegades. Legend of the Free State of Jones was the first, authoritative explanation of just what did happen in Jones County in 1864 to give rise to the legend. This book surveys the facts, the records, and the history of the “Free State of Jones” and well may provide the whole story. Rudy H. Leverett was born in an unplumbed cabin in the woods outside of Hattiesburg, Mississippi. He had a doctoral degree in education and spent his life writing extensively on the subjects of philosophy and the American South. He died on his birthday in 1999.
Genre: Non-Fiction > History Reconstructing Karl Polanyi by Gareth Dale
Requirements: .PDF reader, 3 MB
Overview: Karl Polanyi was one of the most influential political economists of the twentieth-century and is widely regarded as the most gifted of social democrat theorists. In Reconstructing Karl Polanyi, Gareth Dale draws upon primary sources archived in the countries that Polanyi called home—Hungary, Austria, Britain, the United States, and Canada—to provide a sweeping survey of his contribution to the social sciences.

Polanyi’s intellectual and political outlook can best be summarized through paradoxical formulations such as ‘romantic modernist’, ‘liberal socialist’, and ‘cosmopolitan patriot.’ In exploring these paradoxes, Dale excavates and reconstructs Polanyi’s views on a range of topics that have been neglected in the critical literature, including Keynesian economic policy, the evolution and dynamics of Stalin’s Russia, regional integration, and McCarthyism. He reinterprets Polanyi’s philosophy of history, his theory of democracy, and his economic historiography of Ancient Greece and Mesopotamia, and guides readers through Polyani’s critical dialogue with Marxism.
Genre: Non-Fiction > Educational Depression: A Public Feeling by Ann Cvetkovich
Requirements: .PDF reader, 3 MB
Overview: In Depression: A Public Feelings Project, Ann Cvetkovich seeks to understand why intellectuals, activists, professionals, and other privileged people struggle with feelings of hopeless and self-loathing. She focuses particularly on those in academia, where the pressure to succeed and the desire to find space for creative thinking and alternative worlds bump up against the harsh conditions of a ruthlessly competitive job market, the shrinking power of the humanities, and the corporatization of the university. In her candid memoir, Cvetkovich describes what it was like to move through the days as she finished her dissertation, started a job, and then completed a book for tenure. Turning to critical essay, she seeks to create new forms of writing and knowledge that don’t necessarily follow the usual methods of cultural critique but instead come from affective experience, ordinary life, and alternative archives.
Genre: Non-Fiction > Educational Conscience: What It Is, How to Train It, and Loving Those Who Differ by Andrew David Naselli, J.D. Crowley
Requirements: .ePUB reader, 3 MB
Overview: What do you do when you disagree with other Christians? How do you determine which convictions are negotiable and which are not? How do you get along with people who have different personal standards?

All of these questions have to do with the conscience. Yet there is hardly a more neglected topic among Christians. In this much-needed book, a New Testament scholar and a cross-cultural missionary explore all thirty passages in the New Testament that deal with the conscience, showing how your conscience impacts virtually every aspect of life, ministry, and missions. As you come to see your conscience as a gift from God and learn how to calibrate it under the lordship of Jesus Christ, you will not only experience the freedom of a clear conscience but also discover how to lovingly interact with those who hold different convictions.
Genre: Non-Fiction > Faith, Beliefs & Philosophy Horizontal Vertigo: A City Called Mexico by Juan Villoro, Alfred MacAdam
Requirements: .ePUB reader, 5 MB
Overview: At once intimate and wide-ranging, and as enthralling, surprising, and vivid as the place itself, this is a uniquely eye-opening tour of one of the great metropolises of the world, and its largest Spanish-speaking city.

Horizontal Vertigo: The title refers to the fear of ever-impending earthquakes that led Mexicans to build their capital city outward rather than upward. With the perspicacity of a keenly observant flaneur, Juan Villoro wanders through Mexico City seemingly without a plan, describing people, places, and things while brilliantly drawing connections among them. In so doing he reveals, in all its multitudinous glory, the vicissitudes and triumphs of the city ‘s cultural, political, and social history: from indigenous antiquity to the Aztec period, from the Spanish conquest to Mexico City today-one of the world’s leading cultural and financial centers.

In this deeply iconoclastic book, Villoro organizes his text around a recurring series of topics: “Living in the City,” “City Characters,” “Shocks,” “Crossings,” and “Ceremonies.” What he achieves, miraculously, is a stunning, intriguingly coherent meditation on Mexico City’s genius loci, its spirit of place.
Genre: Non-Fiction > History 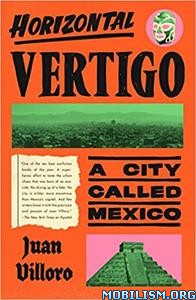 Eat This Book: Knowledge to Feed Your Appetite and Inspire Your Next Meal by Stacy Michelson
Requirements: .ePUB reader, 163 MB
Overview: Explore 99 of the world’s most beloved, delicious, and misunderstood foods in this charming culinary compendium from artist extraordinaire Stacy Michelson. 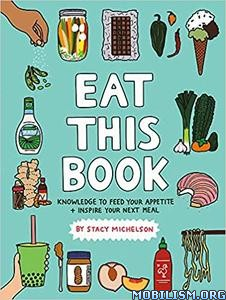 Antoni in the Kitchen by Antoni Porowski, Mindy Fox
Requirements: .ePUB reader, 61.5 MB
Overview: Antoni Porowski, the food and wine guru on Netflix’s sensation Queer Eye, meets people where they live—literally. With appealing vulnerability, he shows cooks of all levels how to become more confident and casual in the kitchen. The verve and naturalness of his approach earned raves from Food & Wine and Bon Appétit to GQ and the New York Times, which noted his dishes prove that “sometimes simple is anything but simplistic.”

Some of the recipes in this book are weeknight healthyish meals, while others are perfect for off-the-cuff entertaining. Visual stunners, they’re often composed of fewer than five ingredients. Whether Bastardized Easy Ramen; Malaysian Chili Shrimp; Roasted Carrots with Carrot-Top Pesto; or Salty Lemon Squares, all can be carried off with panache, even by beginners.
Genre: Non-Fiction > Food & Drink The Knee Injury Bible: Everything You Need to Know about Knee Injuries, How to Treat Them, and How They Affect Your Life by Robert F. Laprade, Luke O’Brien, Jorge Chahla, Nick Kennedy
Requirements: .ePUB reader, 22 MB
Overview: From prominent experts in orthopedics and sports medicine, a comprehensive guide for anyone with knee injury or chronic knee pain: how injuries occur, how to treat problems, and how to return to the life and sports you love
Knee pain and knee injury happen to people at any age and across all walks of life. And they are very common: more than 1 million people underwent arthroscopic knee surgery last year. It can be confusing to navigate the many different treatment options, and surgery and physical therapy are taxing processes on many levels. In The Knee Injury Bible, some of the country’s foremost experts on orthopedics and sports medicine combine their expertise to share a definitive resource for patients.
Genre: Non-Fiction > Health, Fitness & Self-help • types of injuries and pain, and how they happen
• which tests are necessary and which are not
• what to ask at doctor visits
• what to expect when undergoing surgery
• basic physical therapy exercises
• healthy eating during the recovery period
• how to set expectations and return to the activities and sports you love

Chapters also include inspiring stories from other patients and prominent athletes to show readers that they are not alone — and they can recover and live normally again.

What does it mean to be an adult? In the twentieth century, psychologists came up with five markers of adulthood: finish your education, get a job, leave home, marry, and have children. Since then, every generation has been held to those same markers. Yet so much has changed about the world and living in it since that sequence was formulated. All of those markers are choices, and they’re all valid, but any one person’s choices along those lines do not make them more or less an adult.

A former Stanford dean of freshmen and undergraduate advising and author of the perennial bestseller How to Raise an Adult and of the lauded memoir Real American, Julie Lythcott-Haims has encountered hundreds of twentysomethings (and thirtysomethings, too), who, faced with those markers, feel they’re just playing the part of “adult,” while struggling with anxiety, stress, and general unease. In Your Turn, Julie offers compassion, personal experience, and practical strategies for living a more authentic adulthood, as well as inspiration through interviews with dozens of voices from the rich diversity of the human population who have successfully launched their adult lives.
Genre: Non-Fiction > Health, Fitness & Self-help 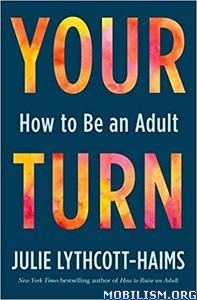