You Are Under Arrest for Masterminding the Egyptian Revolution: A Memoir by Ahmed Salah, Alex Mayyasi (Contributor)
Requirements: ePUB Reader, MOBI Reader, AZW Reader, 1.26 MB
Overview: When hundreds of thousands of Egyptians occupied Cairo’s Tahrir Square in 2011, they challenged a dictator who had ruled the country for three decades. As Egypt dominated headlines and turned the Arab Spring into the news event of the decade, a sleek, modern narrative emerged: the Egyptian Revolution was the spontaneous result of young, tech-savvy Egyptians organizing on Facebook and Twitter.

But websites do not make revolutions; men and women do. You Are Under Arrest For Masterminding The Egyptian Revolution tells the untold, decade-long story of the Egyptian Revolution as experienced by Ahmed Salah, a leading democracy activist whose desire to bring change to his country began as a child when he watched the government rig elections against his father, a prominent politician.

From his vantage point as a co-founder and leader of Egypt’s most prominent protest movements, Salah offers a firsthand account of the growth of the Egyptian opposition, the successes and failures of using the Internet to rebel, and the planning of the Egyptian Revolution. You Are Under Arrest For Masterminding The Egyptian Revolution reveals the gritty reality of how street activists started a revolution, why that revolution failed to change Egypt, and one man’s struggle to honor his father’s last wish: “Promise me you won’t waste your life in politics.”
Genre: History, Memoirs 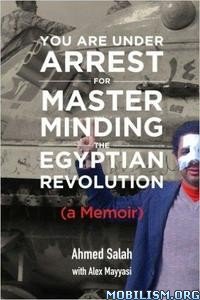