Yesterday’s Gone: Seasons 1-6 Complete Saga by Sean Platt, David W. Wright
Requirements: .ePUB Reader, 2.6 MB
Overview: The breakout horror and sci-fi series with over 1,000 5-star reviews is back. Over 2,500 pages collected together for the first time ever! If you’re looking for a tense post-apocalyptic thriller that will leave you guessing to the end, Yesterday’s Gone is for you!
Genre: Science Fiction > Post-Apocalyptic 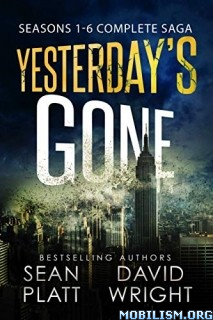 Season One
They thought they were alone. They were wrong.

On October 15th, humanity went missing. A handful of scattered survivors wake to find the world empty of friends, family, and neighbors.

Among them, a child searches for his family. A special agent turned enemy of the state survives a fiery plane crash with no way to reach his daughter. A serial killer discovers he’s no longer at the top of the food chain. Now these strangers must find the strength inside them to weather the new world. But they are not alone.

In the absence of civilization, a new threat emerges. In the stillness, it waits and watches, preying on their weakness. Their only hope is to find more survivors, rise above their fear, and face the oncoming darkness. But can they unite before they too are lost? And can they all be trusted?

Season Two
On October 15, everyone in the world vanished. Well, almost everyone.

Some were left behind, attempting to piece together what happened, find their loved ones, and survive. But they are not alone. One man finds himself on a mysterious island that holds secrets, and perhaps even answers, to what happened on October 15.

A group finds itself taking refuge at The Sanctuary, a religious compound with an enigmatic leader called The Prophet. A serial killer finds himself leading an unlikely group of survivors. A young man searches to prove himself to his group, and avoid being bullied ever again. A young child is called to perform another miracle at great personal cost.

Every decision. Every action. Every dream. Every alliance. Every secret. Every betrayal.

The fight is on and the surviving humans don’t know if they’re on the winning side.

As they battle The Darkness and fight to find their way home, the future has never felt more uncertain. Will they survive, or will The Darkness finally end them?

The past is revealed, and as the remaining survivors discover the truth behind the mysterious disappearances, they uncover a danger far greater than anything they ever imagined.

Season Four
How do you live a normal life when you’ve been through hell?

More than a year has passed since The Event, and the survivors who returned home are trying to stitch their lives back together. They think they are safe. But that is a lie.

The Darkness has followed them, and this time It’s amassing an army of allies. While key officials at Black Island fight to keep the secret, the survivors’ lives converge again. Confused by terrifying visions and unpredictable rampages, they seek help wherever they can find it.

A set of alien vials holds the key to their survival, and to the world’s fate. Can the survivors find the vials before getting swallowed by The Darkness?

Season Five
Time is running out.

Eleven alien vials hold the fate of humanity, but who can be trusted with them?

In their race to save the world, the Black Island Guardsmen must put Paola in a danger unlike anything she’s ever faced.

How far will the Guardsmen go to get the vials? Can Mary protect her daughter from an insidious alien who’s caused too much destruction? The Darkness has already consumed two of their own.

Will Luca be mankind’s savior or its final judge? Can Boricio overcome his past, or will he succumb to his single weakness — an infected Rose? Will the world fall prey to The Darkness, or is there still time for The Light to triumph?

Season Six
The wait is over.

On October 15th, humanity went missing. A handful of scattered survivors woke to find the world empty of friends, family, and neighbors. Now they are home. But they’re not alone.

The Darkness has killed nearly everyone on the planet. But it is no longer the biggest threat to humanity. There is something else.

One final battle. One last shot to save the world. Can this band of survivors overcome an even greater threat before all is lost?