Thucydides (Ancients in Action) by P. J. Rhodes
Requirements: .ePUB reader, 2.0 MB
Overview: Thucydides was labelled the ‘greatest historian that ever lived’ by Macauley and no study of Classical Greece is complete without encountering his history of the Peloponnesian War, the greatest war of Greeks against Greeks in the late fifth century BCE, which ended in the fall of Athens.

This concise introductory guide sets Thucydides in context as a Greek historian writing about the Peloponnesian War; as an intellectual in the era of the ‘sophists’, who were willing to question a variety of traditional assumptions; and as an upper-class Athenian who lived through and was actively involved in the Peloponnesian War as a general.

Including a survey and summary of Thucydides’ work, P. J. Rhodes explores the principles and practices of historiography which Thucydides originated and implemented throughout his History: his narrative insight, an almost scientific judgment and exposition of sources and prejudices, and a strictly defined and authoritative view of what was required in a history of a war. In addition to examining Thucydides’ work, the volume provides an overview of the social, political and intellectual contexts Thucydides was writing in, and looks at his impact in antiquity and beyond, from forming modern concepts of impartial history to his effect on popular culture.
Genre: Non-Fiction > History 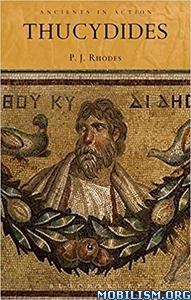