The New Homefront Series Complete by Steven C. Bird
Requirements: .MP3 reader, 614mb
Overview: In the New Homefront serie patriotic Americans struggle to survive in a collapsing world while taking a stand against the evil and tyranny that quickly follows. It’s based on real places and potential scenarios where an out of control government pushes America to the brink of financial and social collapse. This vulnerable state allows the unthinkable to happen, causing the comfort, security, and conveniences of our modern first world society to quickly come to an end. Imagine yourself far from home when the world suddenly changes. Just think back to Hurricane Katrina, Hurricane Sandy, and other such recent events, and you can see just how quickly society breaks down. Those situations even occurred with the nature of the emergency being confined to one specific geographic area, where help is just the next town or state away. Now also think about how that scene would play out if help was not going to come. What if those who you would look to for help had their own emergencies to contend with, leaving you and those around you to fend for yourselves? What about all of those modern conveniences of society like ATM’s, point of sale debit/credit card readers, cell phones, and the internet? What if it all went down while you were away from home? What about our food supply chain? How much food does your family have at home to get them through if the shelves were to go empty? How much do you have with you? Will it all go bad without electricity? Do you have what it takes to defend yourself and those around you when society takes an ugly turn and violence becomes necessary for survival? Those are a few of the things that this book helps you think about.
Genre: Audiobooks > Fiction 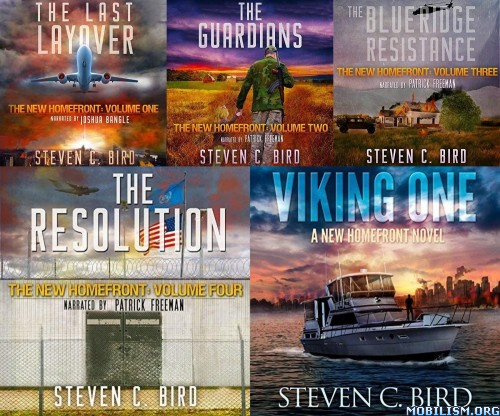 In The Last Layover, an airline crew finds themselves on an overnight layover in New York City, far from their homes when a series of events take place that bring our modern society to its knees. Join them as they face the dangers and difficulties of trying to make their way back to their homes and families in a rapidly deteriorating society, without our modern transportation and communications infrastructure, all while dealing with the lawlessness and violence that quickly ensues in a desperate and broken society. Discover with them the dark side that humanity can quickly take, as well as the good that can come from faith, family, and friendship.

The Guardians is the second book in The New Homefront series where patriotic Americans struggle to survive in a collapsing world while taking a stand against the evil and tyranny that quickly follows. It is the sequel to The Last Layover: The New Homefront, Volume One. The Guardians picks up where The Last Layover left off, as well as introducing an exciting new parallel story line and characters. Join our characters as they struggle to survive and find their way in a world forever changed by the events detailed in Volume One.
The Guardians is a SHTF, TEOTWAWKI, post-apocalyptic action-adventure thrill ride, packed with plausible events that offers readers a glimpse into a potential collapse of society, while providing an exciting and entertaining story with characters you will feel you genuinely know and understand. Continue on this journey with them as they face the dangers, hardships, chaos, and violence, of an unraveling and collapsing modern world, while never losing touch with their own humanity, decency, and dignity.

The Blue Ridge Resistance is the third book in The New Homefront series and picks up where The Guardians left off. The main characters have struggled to survive in a nation that underwent what appeared to be an orchestrated collapse, with several elements joining together to bring America to its knees. With the country and its infrastructure still in disarray, and with power struggles and conflict within all levels of government delaying a recovery, people must fend for themselves in order to survive.
As the residents of the Homefront and their homesteading community find themselves running low on supplies, they must venture outside of their East Tennessee mountain hideaway in search of what they need, while the outside world begins to jeopardize the stability and security they have worked so hard to achieve. Join with them as they continue to fight the evil and tyranny in their new world, while they strive to maintain their own dignity and humanity.
If you like action-adventure, prepper, SHTF, TEOTWAWKI, patriotic, survival fiction, you should check out this series.

The Resolution is the fourth installment in The New Homefront Series where patriotic Americans struggle to survive while fighting the evil and tyranny that pervades their new world.
As the country continued to struggle amidst the fallout from the orchestrated collapse, the United Nations and other foreign entities continued to increase their influence, taking advantage of a nation desperate for order. Introduced as “peacekeepers” by the current administration, armed foreign troops occupied U.S. territory for the first time since the Japanese invaded the Aleutian Islands in Alaska, occupying the islands of Kiska and Attu in 1942-43.
Initially, the UN established itself in major metropolitan areas such as Atlanta, New York, Seattle, and Los Angeles; once seen as a legitimate government presence, they began to venture out into rural areas to quell any potential resistance to their true intentions—enjoying the spoils of a war they did not even have to fight. America and its valuable resources were ripe for the picking, or so it seemed.
The one thing the occupiers did not count on was the will of the American people, a people born into a freedom that was handed down to them since the founders pledged their lives, fortunes, and sacred honors to resist the tyranny they faced under King George III. The patriots of today may face a different foe, but the struggle to hold on to their natural, God-given rights is the same as their forefathers. Human nature will always go in one of two directions: those who will give up freedom for security, and those who will give their lives in the struggle for freedom.

An action-packed stand-alone novel from The New Homefront Series
As the fifth book in The New Homefront Series, Viking One serves as a stand-alone novel, chronicling the apparently orchestrated collapse of our fragile, modern world from the perspective of Jim and Lori Rutherford and friends, as their small town of Delaware City, Delaware begins to feel the noose tighten around them. As a preparedness-minded individual, Jim and crew, working together with friends, neighbors, and local authorities, try to secure their beloved town while keeping their minds open to the possibility of fleeing if the extent of the collapse is as great as they fear.
Join them, along with characters from The Last Layover, as they struggle to maintain the security of their town while hanging on to every last thread of hope and humanity.
If you like action-packed, SHTF, TEOTWAWKI, prepper, collapse-of-society, or survival fiction, check out Viking One as well as the rest of The New Homefront Series and the Society Lost Series by Steven Bird.