The Lay of the Nibelungs by Alice Horton
Requirements: .M4A/.M4B reader, 597 MB
Overview: One of the finest German medieval epic poems, The Lay of the Nibelungs is perhaps best known now as one of the principal sources for Wagner’s four-part music drama The Ring of the Nibelung. It is easy to see how Wagner was enthralled by the story and the poetry for the power of the tale drives the narrative: intense love, loyalty, jealousy, murder, duty, honour and massacre are all interwoven into a classic.
Many of the figures known to us by Wagner’s opera cycle are here: Alberich, Siegmund, Sieglind, Siegfried, Brunhilda, Gunther and Hagen, sometimes in familiar roles, sometimes very different from expectations.
The tragedy is driven by the enmity between two women who were originally friends – Brunhilda, who becomes the wife of Gunther, and Kriemhilda, Siegfried’s wife. A feud between the sisters-in-law leads to conflict and mayhem. Hagen has the dark persona which prompts him to commit treacherous murder, leading the protagonists to a final terrible end. Unlike the Wagnerian version (he drew in the main from the Volsung Saga version, but also made the saga his own), there is no interference from gods or giants, and apart from the appearance of the ‘hood of darkness’, Tarnhelm, which confers mysterious powers on its wearer, there is little magic. But this does not lessen the immense power of The Lay of the Nibelungs, as it moves inexorably forward to its climactic conclusion. The structure of the poem is crucial to the drama of the telling.
The anonymous poet established a form based on a steady four-line stanza with rhyming couplets. But the strength of it lies in the metre, three metrical feet, a caesura, and another three metrical feet, for the first three lines, adding an extra metrical foot for the last line for emphasis. This classic verse translation by Alice Horton, edited by Edward Bell and revised for this recording, is still regarded by scholars as perhaps the most faithful to the 13th century German original. Though modern prose versions are available, they do not have the poetic grandeur befitting such a tale, and Horton’s verse is ideal for an audio recording. David Rintoul brings his decades of experience in classical theatre to bear in his stirring performance.
Genre: Audiobooks > Fiction 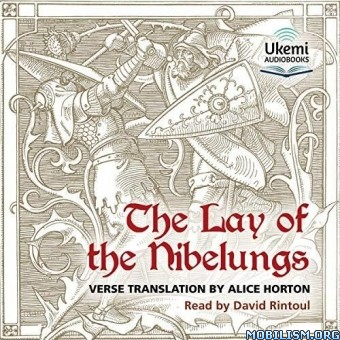