Samurai of the Stars by L.D. Robinson (Tales from the Protectorate #2)
Requirements: .ePUB reader, 425 KB
Overview: The aliens are ganging up on us, and with our allies still recovering from their last war, which they almost lost, defeating our enemies will be largely up to Earth’s fledgling fleet.

The Earth ship Armstrong is commanded by a strong and capable captain, but when he is kidnapped on an alien planet, his first officer, Wendy Hiranaka, must take his place. Unable to rescue the captain, Hiranaka finds herself leading her ship into battle while her confidence as a commander has been shaken, and her crew is questioning her abilities.
Genre: Fiction > Sci-Fi/Fantasy 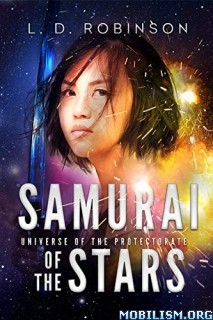