Stalin’s Folly: The Tragic First Ten Days of WWII on the Eastern Front by Constantine Pleshakov
Requirements: PDF Reader, 5.72 MB
Overview: On June 22, 1941, radios all over the Soviet Union crackled with the announcement that the country had been attacked by Nazi Germany. But the voice on the airwaves was not the familiar one of Joseph Stalin; it was the voice of his deputy, Molotov. Paralyzed by Hitler’s unexpected move, Stalin disappeared completely from public view for the crucial ten days of war on the Eastern Front. In this taut, hour-by-hour account, Constantine Pleshakov draws on a wealth of information from newly opened archives to elucidate the complex causes of the Soviet leader’s reaction, revealing the feared despot’s unrealized military stratagems as well as his personal vulnerabilities, while also offering a new and deeper understanding of Russian history.
Genre: Non-Fiction > History 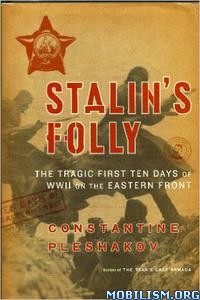