Slice by David Hodges
Requirements: epub Reader, 294kb
Overview: An absolutely gripping standalone crime thriller with twists and turns that will leave you questioning everything.

THERE’S A KILLER INSIDE THE POLICE STATION.
A police station should be a safe place. But not when there’s a psychotic serial killer working there.
THE FIRST VICTIM IS FOUND GRUESOMELY MUTILATED IN HIS MOST SENSITIVE AREA. HE IS DRESSED IN A JUDGE’S WIG.

Detective Superintendent Jack Fulton takes on the grisly murder enquiry and discovers that his murderer might actually be one of the police station staff.

MORE EMINENT VICTIMS FOLLOW. KILLED IN THE SAME SADISTIC MANNER.
The press nickname the razor-wielding assassin “The Slicer.” With the killer stalking the shadowy Victorian building, Fulton has to contend not only with press harassment and police who will stop at nothing to get a result, but also with other problems much closer to home.

As the killer leads him on a grim game of cat and mouse, Fulton has little idea of just how personal that game is about to become . . .
Genre: Mystery/Thriller 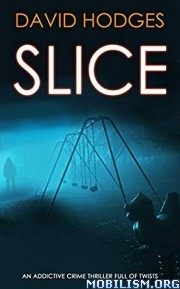