Scorched Earth Series Complete by Boyd Craven
Requirements: .MP3 reader, 343mb
Overview: Brian Cartwright just wants to work and run his farm in peace. The police keep showing up as the HOA from the new neighborhood keeps filing nuisance complaints against him and his farm. What makes matters worse, his former boss George and his son built a big house overlooking the farm. His prepping lifestyle and following the news online is his only other hobby other than church activities.
Genre: Audiobooks > Fiction 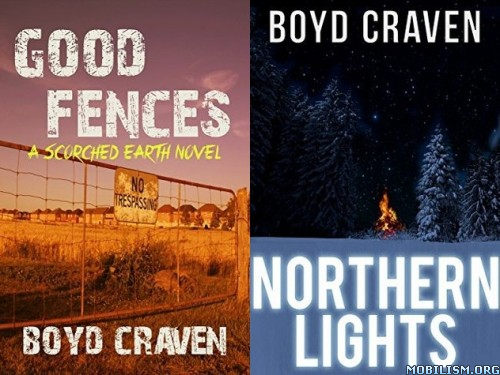 George’s son is the teenager responsible for causing the accident that killed Brian’s wife. Every interaction with the power hungry father drives him insane. To make matters worse, George’s son has been trespassing and gets injured on Brian’s property causing him to build bigger and taller fences.
The neighbors that once shunned Brian Cartwright now need him like never before. America has been attacked with an EMP and they find themselves requiring the help of the widowed farmer the same time he realizes he needs them as well.
When things get dicey, can they mend the wall, or do good fences make good neighbors?

Tom’s a prepper, and with his three friends, they embark on a fly-in fishing trip to Northern Canada to have a long, relaxing vacation. Things turn deadly when an EMP leaves them stranded and alone a thousand miles away from civilization. Winter is coming, and they only brought enough supplies for two weeks.
In a hostile land, there’s no room for mistakes or illness. One wrong step can prove to be as deadly as the wildlife that has no fear of humans, and that views them as more than a potential food source. Escape by boat or over land would be near impossible.
So much to do, so ill-equipped, and so little time. Follow the four friends in their journey of survival. Survival isn’t just an option—It’s life or death.