Passchendaele by Paul Gross
Requirements: ePUB Reader, 3.7MB | Retail
Overview: Sergeant Michael Dunne of the 10th Canadian Infantry Battalion has survived some of the worst fighting of the Great War. Wounded on the Western Front, he returns home to Calgary, a broken man suffering from neurasthenia and facing trial as a deserter should he ever attempt a return to the battlefield.

In Calgary, he finds a complicated love with Sarah Mann, a nurse dismissed from her position because of her German ancestry. Sarah is struggling to care for her chronically ill younger brother, David, and is devastated when he finds someone to lie on his medical certificate so that he can enlist in the war. Though Michael is haunted by his memories of the battlefield, out of duty and love he follows David to the Front. Neither of the two men knows what lies ahead. It is November 1917, and Michael, David and the rest of the Fighting 10th are about to plunge into the hell known as Passchendaele.

Based on the epic Canadian motion picture written by, starring and directed by Paul Gross, Passchendaele immortalizes the story of a battle that has become synonymous with the horrors of the First World War. Yet Passchendaele was also the scene of Allied victory, a triumph carried by Canadians, and one that helped form who we are as a nation. In a story of war, love, futility and sacrifice, Passchendaele reminds us of our country’s greatest strengths and our lasting achievements.
Genre: Fiction | General Fiction/Classics 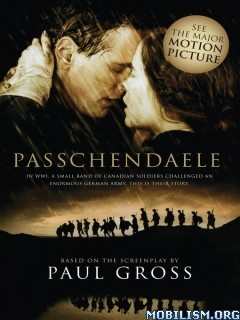