Out of the Dark Series Complete by Boyd Craven
Requirements: .MP3 reader, 457mb
Overview: Dick, AKA Devil Dog’s world changes drastically when the EMP takes out the power grid. The loss of electricity brings out the darker side of human nature across the city. Because he’s a homeless Marine veteran living in the freight tunnels and old sewers beneath Chicago, he’s far better prepared than most people. A small community of good folk do exist, but they are often outnumbered and outgunned. Only the tunnels provide the safety he needs.
Genre: Audiobooks > Fiction 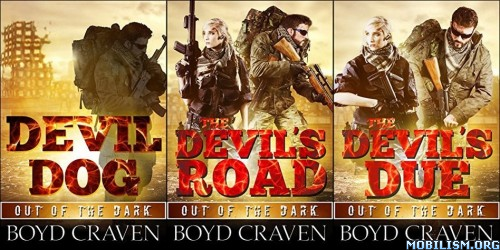 Devil Dog becomes the reluctant savior of women and children, who are treated as barter items by the worst of the worst. Gangs rule topside, and when the SHTF, Dick takes down a lot of the new predatory men. Doing the right thing makes him a hated man by many, and he becomes their prey. To preserve his life and the kids he takes care of, he limits his interactions with the folks who live "Topside". That is, until he runs across someone who he thinks might be his daughter.
Nonstop Action, Gritty, Prepper Type ‘O Stuff.

With the horrors of Chicago put down hard, Dick AKA Devil Dog, Jamie, Mel, Luis and Courtney head west, where they are hoping to re-unite with family. There’s only a few problems along the way… Only a few. Rabid Cannibals, hunted by psychotic raiders and a town that’s forcing a "Tithe" on travelers and a government gone wild… all before the main event… If you like a good old fashioned "Good Guys Vs. Bad Guys" fast action, and a post apocalyptic thriller, you’re going to love the Devil Dog Saga. Book 2 is a nonstop roller coaster ride of action, adventure and unintended consequences.

Live like the dead, or sleep like the dead? Dick makes his choice…
Dick is finally clean–mind and body–from his poisonous addiction, only to be sent reeling again upon awakening and discovering Steve and Jamie have startling secrets of their own. It will take every ounce of focus and resolve to shake off his new reality and make a trek to Arkansas to reunite with his wife and daughter, especially with the other challenges he faces along the way. He thought he was ready to face the world anew, until he realized the world was out to get him first.
Devil Dog III is the ending to the action-packed prepper thriller trilogy, filled with real-life gut-wrenching decisions, and a twist so sharp it may snap your neck.
Proceed with caution.