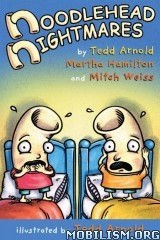 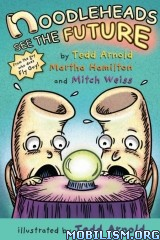 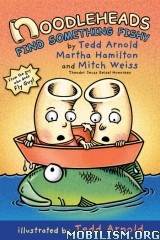 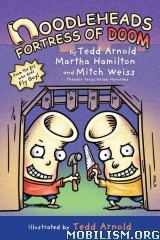 1. Noodlehead Nightmares – Mac and Mac, who love pie and hate making their beds, are hollow-headed. "See in here? Nothing! Zippo! Nada!" Mac explains. That’s why they get duped by their friend Meatball and fooled out of their fair shares of apple pie. Slapstick humor, puns and wacky fun abound as the empty-headed duo comes up with outlandish solutions for everyday problems, such as sleeping under their beds to avoid ever having to make them again. Written in a comic-book style, this book will have young readers rolling on the floor, and educators rethinking their approaches to folklore.

2. Noodleheads See the Future – Tedd Arnold, the guy who does Fly Guy, and renowned storytellers, Martha Hamilton and Mitch Weiss, have done it again: the wacky Noodlehead brothers, who first appeared in Noodlehead Nightmares, are back for a second adventure that brings folktale tomfoolery into the 21st century!
Although Mac and Mac are as hollow-headed as, well, noodles, they are certain Mom will bake them a cake if they gather some firewood for her. In the woods, they run into cousin Meatball, who tricks the Noodleheads out of their hard-earned kindling with imaginary clairvoyant powers. Oh no! Fortunately, the gullible Noodleheads unwittingly accomplish an even greater task for Mom–and earn their beloved cake, after all!

3. Noodleheads Find Something Fishy – Mac and Mac deduce that since fish live in schools, they must be smart. The fish in this funny story are smart enough to outwit Mac and Mac! Cousin Meatball also gets the better of them. He convinces the brothers that if they put their snack into a toy boat, the little boat will grow into a big one. It seems to work. Or does it? Then three fish get the boys to feed them worms while avoiding Mac’s and Mac’s fish hooks. Oh well. Mac and Mac would rather snack on fish crackers and gummy worms anyway! The stories in this book are inspired by traditional folktales referenced in back matter.

4. Noodleheads Fortress of Doom – The Noodlehead brothers are back from the library with a joke book, a fantasy novel, and a dream: to build their very own Fortress of Doom. If they can stop bickering for long enough. And if they can defend it from their wily friend Meatball.
Jump right in with this fourth title in an easy-to-read graphic novel series about more than two hollow pastas trying to have fun.