No Bull: My Life In and Out of Markets by Michael Steinhardt
Requirements: ePUB Reader, 2 MB
Overview: When the official history of twentieth-century Wall Street is written, it will certainly contain more than a few pages on Michael Steinhardt. One of the most successful money managers in the history of “The Street,” Steinhardt far outshone his peers by achieving an average annual return of over thirty percent-significantly greater than that of every market benchmark. During his almost thirty-year tenure as a hedge fund manager, he amassed vast wealth for his investors and himself. One dollar invested with Steinhardt Partners L.P., his flagship hedge fund, at its inception in 1967 would have been worth $462 when he retired from active money management in 1995.

No Bull offers an account of some of the investment strategies that drove Michael Steinhardt’s historic success as a hedge fund manager including a focus on his skills as an industry analyst and consummate stock picker. He also reveals how his uncanny talent for knowing when to trade against the prevailing market trend-a talent that was not always appreciated by several erstwhile high-profile clients-resulted in many of his greatest successes. Here he provides detailed accounts of some of his most sensational coups-including his momentous decision, in 1981, to stake everything on bonds-and his equally sensational failures, such as his disastrous foray into global macro-trading in the mid-1990s.

At the same time, No Bull is the rags-to-riches story of a boy from Bensonhurst and his rise from the streets of Brooklyn to the heights of Wall Street. In a thoroughly engaging narrative, Steinhardt relates the early influences that shaped his attitudes toward life and success, as well as the beginning of his love affair with stock investing. Further, he chronicles his dawning awareness of the need for a purpose in life beyond the acquisition of wealth and how it led to his decision to retire and redirect his energies. We learn about his experiences as the chairman of the Democratic Leadership Council for nearly a decade, as well as his innovative thinking and ambitious projects to strengthen the Jewish community.

The inspiring true story of a Wall Street genius and world-class philanthropist, No Bull is an unforgettable read for finance professionals and students of human nature alike.

Michael Steinhardt is one of the most successful money managers in the history of Wall Street. He is also widely known for his philanthropic activities, particularly in the Jewish community-most notably as cofounder with Charles Bronfman of birthright israel, a program whose mission is to provide a free educational opportunity for every young Jewish person of the Diaspora to visit Israel.
Genre: Biographies & Memoirs 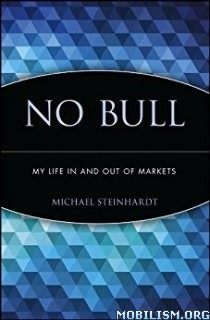