Hostage Hearts by Trudy Thompson
Requirements: .PDF reader, 500 KB
Overview: Kayla Jardane’s reached the end of her endurance. Her parents are dead. Her brothers missing. And her planet’s facing annihilation. She needs a savior. Badly. But she doesn’t expect to find one with long, dark hair, a face that put Adonis to shame, and a body to die for. His only flaw–she thinks he’s working for her enemy. When she tries to escape, her sexy savior shackles her wrist to his with Tung cuffs, forces her aboard his starcruiser, then tells her he’s lost the key. . . When Dolph Rynard discovers a beautiful woman in the flatlands of Colony III, he suspects she has information that will aid in his mission to bring the criminal he’d been investigating to justice. But she refuses to answer any of his questions. He decides to keep her shackled to his arm–and in his bed–until she does.
Genre: Fiction > Romance; Sci-Fi 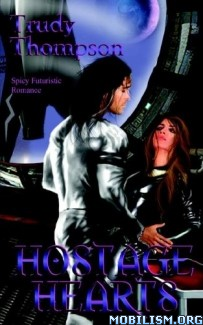