Gamer Fantastic by Martin H. Greenberg & Kerrie L. Hughes (Editors)
Requirements: .ePUB, .PDF reader, 1.3 Mb
Overview: These thirteen original stories by veterans of the fantasy realms take role-playing games and universes to a whole new level. From a teenager who finds a better future in virtual reality; to a private investigator hired to find a dying man’s grandson in the midst of a virtual reality theme park; from a person gifted with the power to pull things out of books into the real world; to a psychologist using fantasy role-playing to heal his patients; from a gaming convention where the real winners may not be who they seem to be; to a multi-layered role-playing game that leads participants from reality to reality and games within games-these imaginative and fascinating new tales will captivate both lovers of original fantasy and anyone who has ever fallen under the spell of role-playing games.
Genre: Fiction > Sci-Fi/Fantasy 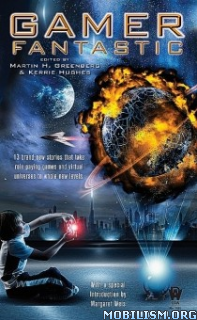 Included in this collection are:
Roll On!: Special Introduction by Margaret Weis
Escapism by Chris Pierson
Gaming Circle by Donald J. Bingle
Rescuing the Elf Princess Again by Ed Greenwood
Roles We Play by Jody Lynn Nye
Mightier Than the Sword by Jim C. Hines
Griefer Madness by Richard Lee Byers
Mission From Hel by Bill Fawcett
The Gods of Every Other Wednesday Night by S. L. Farrell
“You Forgot Whose Realm This Really Is!” by Brian M. Thomsen
The War on Two Fronts by Jean Rabe
Aggro Radius by David D. Levine
Being Played by Steven E. Schend
Game Testing by Kristine Kathryn Rusch
ERNEST GARY GYGAX (1938-2008) a tribute by Ed Greenwood