Firsts in Series: Kick Azz Teen Witches by Jenna Ocean Meadows
Requirements: .ePUB reader, 653 KB
Overview: Jenna Ocean Meadows is a free-spirited geek who dreams of visiting Germany someday just to tour the Opel automaking headquarters during the world-famous Octoberfest. Until then, she enjoys her peaceful life in her local Greenlane village community hanging out with Nerdy Lee on the weekends.

She spends her free time enjoying walks around the lake with her hideous-looking dog, Scamp. It’s in a very friendly neighborhood where most of us have direct views of the serene water. Locals love to see her coming with her bubbly personality, bright-colored hair, nails and makeup and stripy, bold attire.
Genre: Fiction > Sci-Fi/Fantasy Paranormal 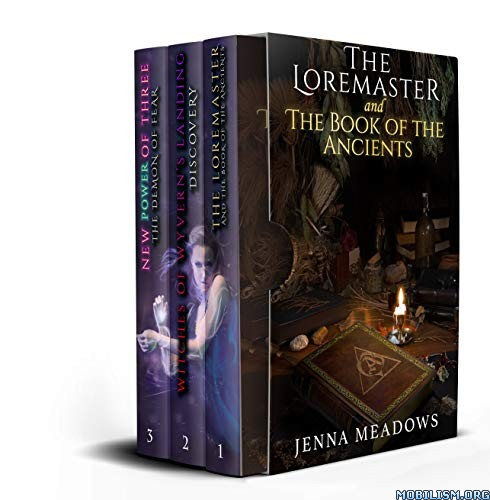 BOOK 1 – The Loremaster: And The Book Of The Ancients
The TikTok Magic Prank
Nestled into the hills of Greenville, South Carolina are two high schools within one, known as Hillcrest High. The school itself is known to the whole population for its interstate championship winning football team, the Rams. Students at the other school call the teens here Maglorones.
The other school, which is hidden from the public, is known as The Academy. It’s much smaller and is only visible to those with special abilities. This small campus may not have many students or a winning football team, but they do have magic. Here at the magic school, these students are apprentices to the Loremaster. They are the Neophytes, a bunch a kick azz teens trying to find their way in the world.
On a quest for more knowledge, Norton Washington acquires an old, tattered book entitled THE BOOK OF THE ANCIENTS. He seeks to understand the writings of ancient Dutch combined with unknown runes. It’s connected to a group of powerful demons determined to cause pain and destruction.
The Academy students are in grave danger. And Principal Washington must work with Dorothy and other Neophytes from The Academy to vanquish the demons before they can be released and wreak havoc in the community through a teen app known as TikTok.

BOOK 2 – Witches of Wyvern’s Landing: Discovery
The Teen Witch Assessment
Violet and Scarlet are just like every other child their age: energetic and excitable. Being twins means having a constant playmate, and they’ve been thick as thieves since the moment they were born, balancing each other and playing confidante or co-conspirator as needed.
Violet, older by a few minutes (and don’t you forget it) is her father’s daughter; level-headed, curious, eager to learn. Scarlet is the fierier and more whimsical of the two, always getting them into trouble.
They are perfectly normal young girls with their whole lives ahead of them, content with their parents in a grand, comfortable home in Virginia, where nothing dramatic ever happens.
Until, one night, their Aunt Cal – a mysterious and chaotic woman at the best of times – visits their parents, a month after their thirteenth birthday. She comes bringing news of the impossible – magical blood is in their family line.
Violet and Scarlet may be powerful witches and must go to Wyvern’s Landing immediately to be assessed. But first, they put themselves through a magical test of their own.

BOOK 3 – New Power of Three: The Demon of Fear
Who Is Barbas?
Three cousin witches are fighting their own fears, just like most people in life. But it’s those fears that could be their downfalls when they “accidentally” conjure up a couple of demons while trying to figure out who killed Christian’s mom.
This leads to a boatload of hidden family secrets coming out as well as some decisions that only teen witches could make. What they choose to do could mean the downfall of their entire family… or humankind, for that matter.
Both demons have deep-rooted pasts with The Sisters, who were responsible for vanquishing both of them to purgatory years ago. Barbas, the demon of fear, found a loophole to return to earth to play on the fears of the young witches.
If he’s successful, he can remain here forever. Khol, on the other hand, was accidentally summoned by the teens, thanks to Sasha’s obsession with the Book of Shadows. Now that he’s here, he’s vowed to take back what he believes belongs to him.
Will these two demons wreak havoc on the lives of these three teens? Who will prevail?