Brewer’s Britain & Ireland by John Ayto, Ian Crofton
Requirements: .PDF reader, 73 Mb
Overview: Brewer’s Britain and Ireland is a Brewer’s-style reference book about place-names and the historical associations of the places they designate. Lying part-way between the traditional gazetteer and a traveller’s "armchair companion", it takes the reader on an informative and fascinating "heritage tour" of thousands of places and place-names in every part of the islands of Britain and Ireland. Brewer’s Britain and Ireland is a "phrase and fable gazetteer", gathering together in one A-Z volume the linguistic, historical, folkloric and literary associations behind thousands of locations in the British Isles, both celebrated and less well-known, from Ashby-de-le-Zouch to Blubberhouses, and from Wigton to Wetwang. The headwords will cover major towns and cities, intriguingly named villages, physical features such as rivers, mountains, forests and others, nicknames of places, fictional place-names and a multitude of other curiosities of locational nomenclature.
Genre: Non-Fiction > History 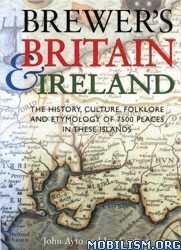