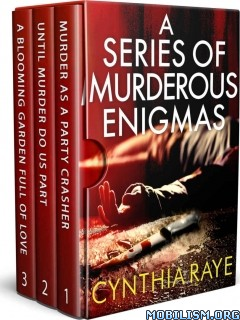 Murder as a Party Crasher
Dr Grace Philips and her family fit perfectly in the setting of North Pointe, where privilege thrives and everyone gets to have a piece of the American Dream. The Philips seem to have everything they ever wished for, but life always comes crashing down when you least expect it. And this is exactly what happens during a night that none of them will ever forget, a night that Grace receives a chilling phone call. Someone has been found dead in her own home. To add to the shock, it appears that this happened during a party her daughter threw without her permission. Will Grace manage to expose the truth before it’s too late? Or will Hazel’s bright future end before it even had a chance to begin?

Until Murder Do Us Part
The small town of Lake Pleasant is gearing up for its biggest event since its founding; the Dorsett-Parsley wedding, a massive celebration in honor of the town’s most popular and wealthy couple. This joyful occasion, though, will quickly turn morbid, as among the guest list, an unwelcome murderer has also joined the festivities… Shock spreads when during the lively reception, a member of the bridal party, a bright young woman named Rachel West, drops dead. Armed with nothing but her wits and a hunger for justice, a recently retired teacher and a wedding guest, Jessica, decides to investigate the murder by herself (and her sassy cat named Slinky). Will Jessica manage to expose the shocking truth about what really happened to Rachel? Or will her death forever remain an unresolved mystery?

Mystery in the Secluded Mansion
April Ryan is struggling to make ends meet at her beach shop in North Carolina, until, one day, she receives an invitation from a high-tech entrepreneur, offering her six invaluable antique books and a free long weekend at his North Carolina Mountain Mansion. The offer, although suspicious, is hard to pass on, as it also extended to her fiancé, Drake Rivenbark. What is it that awaits the couple in the secluded mansion? The weekend quickly turns sour when a terrible snow storm effectively imprisons them in the mansion, along with the rest of the guests. An enigmatic game begins between seemingly unrelated people, and April and Drake will be called to discover their host’s dubious motives. Will they succeed before time runs out? Will they be able to find their host’s hidden agenda and survive the weekend in the snowy and secluded mansion?