A Path Where No Man Thought: Nuclear Winter and the End of the Arms Race by Carl Sagan, Richard Turco
Requirements: .PDF reader, 21 mb
Overview: This is a tough-minded and at the same time hopeful book about what is by far the most serious threat ever identified to the global civilization and the human species.
Genre: Non-Fiction > Educational 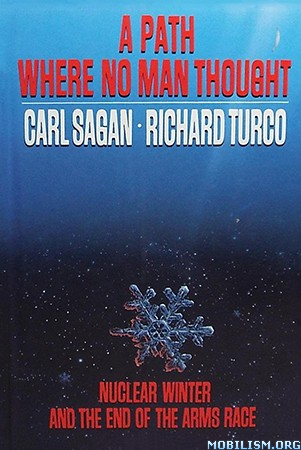 The first light of the Trinity nuclear explosion over the New Mexico desert in 1945 heralded the dawn of a new age of military power and unprecedented global insecurity. During the following decades, weapons of mass destruction were built at a breathtaking pace— each side convinced that the more it had, the safer it was—until the global arsenals were glutted with tens of thousands of nuclear weapons. Now, in a time of dramatic improvement in U.S./Soviet relations, there is a temptation to believe that the danger is past. Even with existing and anticipated treaty reductions, though, there are still enough weapons in the world to devastate every city on Earth twenty-five times over.

But that’s not the worst of it. Discovered in 1982-83, nuclear winter is the precipitous and widespread cold and dark that, it is predicted, would be generated in even a “small” nuclear war, putting at risk billions of people all over the Earth. It was a landmark discovery, one that revealed in the starkest terms how vulnerable our global civilization is to the long-term environmental after-effects of nuclear war.

Despite the much-heralded thawing of the Cold War, the fact remains: even a limited use of our current arsenals can provoke a planetary-scale nuclear winter, indiscriminate in its ravages. Years of intensive scientific research have further substantiated and refined nuclear winter theory, and, disturbingly, have confirmed its stunning prediction of climatic catastrophe, agricultural collapse, and world famine.

Carl Sagan and Richard Turco were instrumental in the discovery and development of the nuclear winter theory. They here tell the personal story of their findings. In recognizing the threat of nuclear winter, they have exposed dangerous inadequacies in U.S. and Soviet nuclear policy and doctrine that have yet to be addressed in the current climate of apparent goodwill. Now is the time, the authors propose, to introduce sweeping reductions in the world arsenals and reforms in the thinking that sustains them—changes, they argue, that would lead to far greater political and military stability, a more just allocation of economic resources to human needs, and protection from the deadly prospect of nuclear winter.