A Circus of Ink by Lauren Palphreyman (Ink #1)
Requirements: .ePUB reader, 363 kB
Overview: We are bound by ink. He is supposed to kill me.
In a world where stories are forbidden, Elle has a dangerous power: Creation. That’s why tattooed soldier Jay is sent by the gods to kill her.

But when Elle is faced with the monster sent to deliver her Ending, she catches the glimmer of curiosity in his eyes—an emotion so unusual in his kind. Convinced having a ruthless killer on her side will help her avenge her father and destroy the gods, she makes the decision not to run. And it changes everything.

Soon, the two enemies are forced to seek refuge at the Circus at the Edge of the World, where forbidden passions start to grow. But both are keeping dark secrets. Their deaths have been written by the Creators. And the foretold End is coming. When all are bound to the story created by the gods, can Elle and Jay rewrite the deadly fate intended for them and the world?

A dark epic adult fantasy romance for fans of forbidden romance, dystopia, and magic. A Circus of Ink is book one in the Ink duology.
Genre: Romance, Fantasy 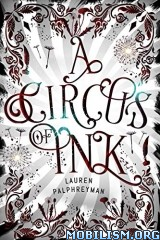