2 Books by Mike Ashley (The Mammoth Book series)
Requirements: ePUB, MOBI Reader, 2.68 MB
Overview: Michael Raymond Donald Ashley (born 1948) is a British bibliographer, author and editor of science fiction, mystery, and fantasy.
He edits the long-running Mammoth Book series of short story anthologies, each arranged around a particular theme in mystery, fantasy, or science fiction. He has a special interest in fiction magazines and has written a multi-volume History of the Science Fiction Magazine and a study of British fiction magazine The Age of the Storytellers. He won the Edgar Award for The Mammoth Encyclopedia of Modern Crime Fiction. In addition to the books listed below he edited and prepared for publication the novel The Enchantresses (1997) by Vera Chapman. He has contributed to many reference works including The Encyclopedia of Fantasy (as Contributing Editor) and The Encyclopedia of Science Fiction (as Contributing Editor of the third edition). He wrote the books to accompany the British Library’s exhibitions, Taking Liberties in 2008 and Out of This World: Science Fiction But Not As You Know It in 2011.
Genre: Fiction, Mystery/Thriller 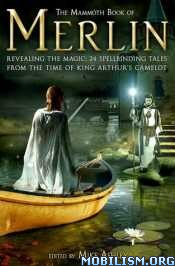 The Mammoth Book of New Sherlock Holmes Adventures
The biggest collection of new Sherlock Holmes stories since Sir Arthur Conan Doyle laid down his pen–nearly 200,000 words of superb fiction featuring the Great Detective by masters of historical crime, including Stephen Baxter, H. R. F. Keating, Michael Moorcock and Amy Myers.Almost all the stories here are specially written; the cases presented in the order in which Holmes solved them. The result is a new life of Sherlock Holmes, with a continuous narrative alongside the stories that identifies the ‘gaps’ in the canon and places the new and hitherto unrecorded cases in sequence. Plus an invaluable complete Holmes chronology.

The Mammoth Book of Merlin
Over 20 tales chronicling the adventures of Merlin and the magic of the Arthurian world. This is a reissue of the superb collection, to coincide with NBC’s primetime release of 20-part drama Merlin (first released in UK on BBC with record viewing figures, and a second series on the way).
A superb collection of stories of magic and adventure from the golden age of Arthurian legend by bestselling writers. Enter into the darker realms of the age of the Knights of the Round Table, when magic held sway and Merlin vied with Arthur’s heroic new world. Included are: Jane Yolen on Merlin’s youth and coming of age; Marion Zimmer Bradley on Nimu, Merlin’s lover and doom; Charles de Lint on Merlin’s influence through the centuries; Darrell Schweitzer on the legends of Merlin’s birth; plus stories by Tanith Lee, Peter Tremayne, Phyllis Ann Karr, Jennifer Roberson, and many others. There is also a detailed introduction by Mike Ashley on the mystery and magic of Merlin and his world.