World War II : An Encyclopedia of Quotations by Howard J. Langer
Requirements: .PDF reader, 4 MB
Overview: An all-encompassing book with more than a thousand quotations, this work breathes life into an era unprecedented in world history. Covering all aspects of the war, the volume includes more than 300 individuals from the Allies, the Axis, and the neutrals. It quotes the major political leaders, including Churchill, Hitler, Roosevelt, and Stalin, and military officers―not just Eisenhower, Marshall, and King, but also Montgomery, Rommel, Zhukov, and Yamamoto. It covers historians Shirer, Sherwood, and A.J.P. Taylor, journalists Pyle, Murrow, and Hersey, and diplomats Ciano and Ribbentrop. It also includes little known people―a Comfort Woman and an African American G.I. who watched German POWs eat in a restaurant that barred him. Also featured are a lexicon of slang terms, nicknames, and code words and sections on the movies and songs of the era.

Quotations come from traditional sources, enemy documents seized after the war, and hitherto secret archives. They come from speeches, news accounts, memoirs, and interviews, from captured documents and from Ultra and Magic―which broke the German and Japanese secrect codes. This volume is unlike any other book ever compiled on the war. It is for history buffs, World War II buffs, and all libraries.
Genre: Non-Fiction > History 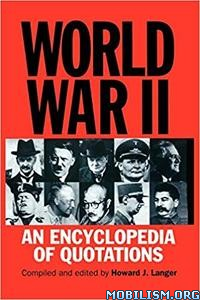