We Were Going to Change the World: Interviews with Women from the 1970s and 1980s Southern California Punk Rock Scene by Stacy Russo, Mike Watt
Requirements: ePUB Reader, 18.3MB
Overview: The punk rock scene of the 1970s and ’80s in Southern California is widely acknowledged as one of the most vibrant, creative periods in all of rock and roll history. And while many books have covered the artists who contributed to the music of that era, none have exclusively focused on the vitality and influence of the women who played such a crucial role in this incredibly dynamic and instrumental movement.

We Were Going to Change the World captures the stories of women who were active in the SoCal punk rock scene during this historic time, adding an important voice to its cultural and musical record. Through exclusive interviews with musicians, journalists, photographers, and fans, Stacy Russo has captured the essence of why these women were drawn to punk rock, what they witnessed, and how their involvement in this empowering scene ended up influencing the rest of their lives.

From such hugely influential musicians and performers as Exene Cervenka, Alice Bag, Kira, Phranc, Johanna Went, Teresa Covarrubias, and Jennifer Precious Finch, to such highly regarded journalists, DJs, and photographers as Ann Summa, Jenny Lens, Kristine McKenna, Pleasant Gehman, and Stella, to the fans and scenesters who supported the bands and added so much color and energy to the scene, We Were Going to Change the World is an important oral history of the crucial contributions women injected into the Southern California punk rock scene of the 1970s and ’80s. Empowering, touching, and informative, Stacy Russo’s collection of interviews adds a whole new dimension to the literature of both punk rock and women’s studies.
Genre: Non-Fiction, Women’s Studies 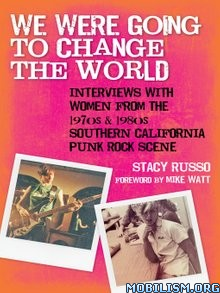