Two Trains Running by Lucius Shepard
Requirements: .ePUB reader, 988 KB
Overview: This collection of fact and fiction was inspired by the time science fiction writer Lucius Shepard spent with Missoula Mike, Madcat, and other members of a controversial brotherhood known as the Freight Train Riders of America. Shepard rode the rails throughout the western half of the United States with the disenfranchised, the homeless, the punks, the gangs, and the joy riders for the magazine article "The FTRA Story." That original article is presented here, along with two new hobo novellas, "Over Yonder" and "Jailbait."
Genre: Fiction > Sci-Fi/Fantasy , Short Stories 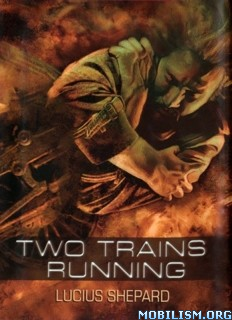 FTRA
Shepard was contracted by a magazine to do a story on an organization called the FTRA (Freight Train Riders of America). Talk to certain law enforcement officers and you will be told that this is a well-organized clandestine operation specializing in drug running with close links to the mafia. In actuality they turned out to be more like a dissolute and geographically dispersed biker gang, with neither the money nor the ability to stay sober for short periods that are required to own and maintain a bike. Two things are clear, however. Firstly, in order to gain their confidence and get them to talk to him, Shepard had to be prepared to get as drunk and stoned as the hoboes themselves. And secondly, at any moment one of them was liable to have turned nasty and tried to kill him.

Over Yonder
Alcoholic Billy Long Gone finds himself on an unusual train. As Billy travels his health improves and his thinking clears, and he arrives in Yonder-an unlikely paradise where a few hundred hobos live in apparent peace and tranquility. But every paradise has its price, and in Yonder, peace and tranquility breed complacency and startling deaths.

Jailbait
A hardcore tale of deception, lust, revenge, and murder in the seedy underbelly of rail yards and train hopping. Madcat, who functions best in a whiskey-induced haze, must decide between solitude and companionship when he meets up with Grace, an underaged runaway. Grace, in turn, seeks the security of an older man and the life about which only young girls can dream.