True Crime Stories Volume 2: 12 Terrifying True Crime Murder Cases by Ryan Becker
Requirements: .ePUB Reader | 422 kb
Overview: Have you ever wondered what is in the mind of a killer? Are you fascinated by what makes someone snap and kill, or carry out a carefully planned murder?

In this second book in the series, List of Twelve Volume 2, author Ryan Becker examines 12 individuals who did just that and became notorious as a result.

From Blaine Norris and Ryan Trimble, who conspired to commit bloody murder for the sake of a film, to James Edward Pough who became a mass shooter after his car was repossessed, it is a frightening yet fascinating look at the sometimes-trivial things which set people onto a path of brutal killing and terror.

Each one made their darkest fantasies into a reality when they made the decision to kill and each one has earned their own terrible place in this gruesome hall of fame.
Genre: Non Fiction True Crime 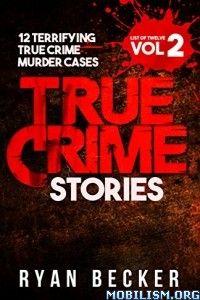