Trial by Ice: The True Story of Murder and Survival on the 1871 Polaris Expedition by Richard Parry
Requirements: .ePUB reader, 3.6 MB
Overview: In the dark years following the Civil War, America’s foremost Arctic explorer, Charles Francis Hall, became a figure of national pride when he embarked on a harrowing, landmark expedition. With financial backing from Congress and the personal support of President Grant, Captain Hall and his crew boarded the Polaris, a steam schooner carefully refitted for its rigorous journey, and began their quest to be the first men to reach the North Pole. Neither the ship nor its captain would ever return.

What transpired was a tragic death and whispers of murder, as well as a horrifying ordeal through the heart of an Arctic winter, when men fought starvation, madness, and each other upon the ever-shifting ice. Trial by Ice is an incredible adventure that pits men against the natural elements and their own fragile human nature. In this powerful true story of death and survival, courage and intrigue aboard a doomed ship, Richard Parry chronicles one of the most astonishing, little known tragedies at sea in American history.
Genre: Non-Fiction > Biographies & Memoirs 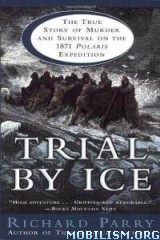