Treasure Under the Tundra: Canada’s Arctic Diamonds by L.D. Cross
Requirements: ePUB or AZW3 Reader, 1.5MB
Overview: It is said that the sparkle from Canadian diamonds mimics the awesome and seductive radiance of the northern lights, and yet, until 1991, no one thought diamonds could even be found in Canada. No one except two geologists who went in search of diamonds and found them on the Lac de Gras Barren Grounds at Point Lake near Yellowknife in Canada’s Arctic.

The discovery by Chuck Fipke and his partner, Dr. Stu Blusson, caused great excitement in international diamond circles. Today, Canada is the world’s third-largest producer, by value, of rough stones. Why? In contrast to gems mined in Africa, Canada’s stones are considered pure “ice,” and they are also “clean”— not tainted by bloodshed and war as they are in such parts of the world as Sierra Leone and Angola.

The discovery of diamonds in Canada’s Arctic is an amazing story of perseverance in the face of immense odds. And the story has a very happy ending.
Genre: Non-Fiction, History 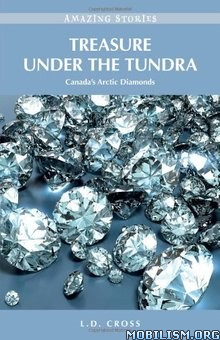