The Tide Series Box Set (1-4) by Anthony J Melchiorri
Requirements: ePUB Reader, 1.1MB
Overview: A devastating bioweapon will change the face and fate of humanity as we know it.

Captain Dominic Holland leads a crew of skilled covert operatives and scientific personnel aboard a clandestine ship dedicated to fighting chemical and biological warfare. Their missions have taken them across the world to combat sinister plots and dangerous adversaries. But their next assignment is more dangerous than any they faced before.

Far off the eastern coast of the United States, intelligence officers discover a covert laboratory on an abandoned oil rig with unspeakable horrors. Twisted creatures wash ashore across the country. Hospitals are overrun by patients suffering from an incurable disease with terrifying symptoms.

Dom and his team may be the only ones equipped to find out why. They embark on a globe-trotting race to unravel the apocalyptic mystery behind the bioweapon destroying civilization. But will their efforts be enough to turn the tide—or is humanity’s fate already sealed?
Genre: Fiction > Sci-Fi/Fantasy 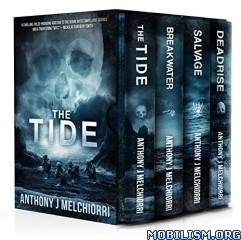 #1 – The Tide
An unearthed scientific secret will bring humanity to its knees.

Aboard a clandestine ship with unparalleled technology, Captain Dominic Holland commands a crew of skilled covert operatives and talented scientific personnel dedicated to fighting biological and chemical warfare. Their missions have taken them all over the globe to combat sinister plots and dangerous adversaries. But a new assignment leads them to a genetic engineering laboratory on an abandoned oil rig where they discover the most disturbing threat to mankind they have ever seen.

Back in the United States, CIA analyst Meredith Webb exposes a frightening connection between the agency she has devoted her life to and the abandoned oil rig. Her investigations are short-lived when terror spreads across the country. Something is turning humans into nightmarish creatures hell-bent on destruction.

Dominic and Meredith face impossible odds in a perilous effort to fight the impending apocalypse. But will their efforts be enough to turn the tide—or is humanity’s fate already sealed?

#2 – The Tide: Breakwater
The tide has turned against humanity…

Governments across the globe have failed to stop the spread of the Oni Agent. The biological weapon continues to wreak havoc. Those that are infected become abominations known as Skulls, a fate worse than death.

Captain Dominic Holland and Meredith Webb have made it to Fort Detrick. The Army base was once a bastion for America’s biodefense. Now, swarms of hungry Skulls prowl outside the walls. With Fort Detrick’s resources, Dom and Meredith think they may finally have a chance to slow the spread of the Oni Agent.

But with the United States military in disarray, the situation outside Detrick’s walls grows bleaker. More and more civilians succumb to the Skulls—or become them. Dom leads a desperate mission to establish a safe zone for civilians fleeing the nightmarish creatures.

Despite this apocalyptic new world, Dom and the Hunters are determined to succeed. New threats and discoveries challenge them every step of the way. But they soon find potential help from an unlikely source…if they can survive long enough to receive it.

#3 – The Tide: Salvage
New heroes emerge from the smoldering ashes of humanity…
But so do new threats.

A man-made plague has ravaged humanity, the military is in shambles, and chaos reigns over the world. Hope seems nothing more than a dream.

Captain Dominic Holland is determined to stop the inevitable. His daughters are finally safe, and his crew has found new ways to combat the Skulls. He leads the Hunters on a mission to recover vital research that may hold the key to stopping the biological agent responsible for this apocalyptic new world.

But unexpected new dangers threaten the Hunters’ efforts. They must adapt and face these challenges with everything they have. After all, it’s no longer just their lives on the line. The future of the human race relies on their success.

Can the Hunters salvage what remains of humanity? Or is it already too late?

#4 – The Tide: Deadrise
They might be humanity’s only hope…
And they were left for dead.

Captain Dominic Holland’s greatest weapon against the apocalypse is his ship. The Huntress is the heart of Dom’s scientific research and military operations. And it has been taken. Dom must embark on a perilous mission to retake it if he stands any chance at finding the cure the world so desperately needs.

Dom’s daughter, Kara, is stranded in the middle of Skull-infested Virginia. While she and a few others struggle to reunite with Dom and the Hunters, enemies more terrifying and ruthless than the Skulls emerge.

New adversaries appear at every turn. The Hunters are running out of time and resources. They have no choice but to rise in the face of almost certain defeat and fight to save humanity from the brink of utter annihilation.