The Sun UK – January 16, 2021
Requirements: .PDF reader, 124 MB
Overview: The Sun is a tabloid newspaper published in the United Kingdom and Republic of Ireland. As a broadsheet, it was founded in 1964 as a successor to the Daily Herald; it became a tabloid in 1969 after it was purchased by its current owners. Since The Sun on Sunday was launched in February 2012, the paper has been a seven-day operation.
Genre: Magazines & Newspapers 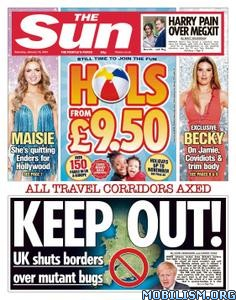