The Marking by Destiny Diess (The Marking Trilogy #1)
Requirements: .ePUB reader, 408 kB
Overview: She’s sure everyone can live together. But when her father and this wolf-pack leader clash, she’ll have to choose a side…

Mae Cogan’s father warned her off werewolves. But she stubbornly believes that humans and shifters deserve to peacefully coexist, even if dating them could be dangerous. And when she’s instantly attracted to a rugged and sexy alpha, she abandons all caution for a chance to get intimate.

Damon Hale knows he must earn his pack’s respect. After his brother’s suicide, the best thing for his people would be to find his true shifter mate and show his leadership. But when an alluring human turns out to be his destiny, he fears claiming an outsider as his partner will only lead to tragedy.

As Mae battles loyalty to her father and her longing to be in Damon’s arms, she starts to doubt whether it’s worth betraying family for the rough and violent ways of the wolf. And caught between protecting his own and fulfilling his needs, Damon is forced to push her away when pups start getting kidnapped.

Will the fated pair give in to their passions and let love forge the strongest bond?

The Marking is the captivating first book in The Moon Goddess paranormal romance series. If you like dark stories, steamy encounters, and thrilling twists and turns, then you’ll adore Destiny Diess’s enthralling tale.
Genre: Romance, Paranormal 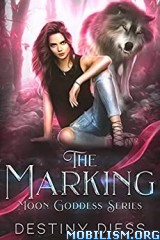