The House of Crimson & Clover (Volumes I-IV) by Sarah M. Cradit
Requirements: ePUB Reader, 1.3MB | Retail
Overview: Sarah is the USA Today and International Bestselling Author of contemporary and epic fantasy. Her work has been described as rich, emotive, and highly dimensional.

An unabashed geek, Sarah enjoys studying obscure subjects like the Plantagenet and Ptolemaic dynasties, and settling debates on provocative Tolkien topics such as why the Great Eagles are not Gandalf’s personal taxi service. Passionate about travel, Sarah has visited over twenty countries collecting sparks of inspiration (though New Orleans is where her heart rests). She’s a self-professed expert at crafting original songs to sing to her very patient pets, and a seasoned professional at finding ways to humiliate herself (bonus points if it happens in public). When at home in Pennsylvania, her husband and best friend, James, is very kind about indulging her love of fast German cars and expensive lattes.
Genre: Fiction > Sci-Fi/Fantasy 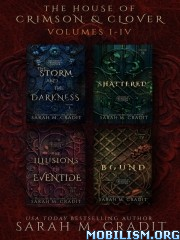 Included in this set:

Volume I: The Storm and the Darkness
Ana Deschanel has made a terrible mistake. The only chance of protecting the other people involved is to flee New Orleans, the only home she has ever known, for the quiet solitude of Summer Island.

Summer Island, Maine (population 202) is not the tranquil escape Ana imagined. The locals are distant and cold, especially her neighbor, the reclusive veterinarian Jonathan St. Andrews. Her only lifeline is the kind but odd caretaker Alex Whitman. Showing up at all the right moments, he warns her she is completely unprepared for a Maine winter. As the first winter storm approaches to whispers of an island shutdown- Ana realizes that she may soon be cut off from the rest of the world.

After a surprising encounter with Jonathan’s brother, Finn, Ana finds herself braving the storm to return something to him. Unprepared for the Maine storm, she slips and falls onto the jagged rocks along the shore. The St. Andrews brothers find her in the nick of time, but she remains unconscious. As the storm worsens, the St. Andrews brothers learn there are other, more sinister forces at work closer than they ever imagined.

With no help from the outside world, they must find a way to protect themselves from both the storm, and the growing darkness that looms across the island.

Volume II: Shattered
Anasofiya Deschanel fled to Maine to escape her demons. She learned quickly, and violently, that you cannot run from what’s inside you.

Following a series of unfortunate events, Ana finds herself drowning in the consequences of her actions, as her heart dangles between the hearts of the St. Andrews brothers. Jon’s understanding darkness threatens to consume her, while Finn’s kind heart reminds her of a goodness she does not feel she deserves. Between all three of them lies a secret with the potential to change everything.

When the truth comes crashing down, Ana is forced to face the same demons she once ran from. As she learns more about where she came from, these realizations drive her to a desperate decision that will change everyone’s lives, forever.

Volume III: The Illusions of Eventide
Nicolas Deschanel was betrayed by the only two people who matter to him. Their disloyalty stung and an overwhelming sense of loss lingers. Nicolas has lived the high life professing to not have a care in the world, and now this illusion is calling his bluff.

Determined to take control of an existence now devoid of purpose, he sojourns to his family’s holiday home on the Gulf of Mexico. Resolved more than depressed, he plans to privately say goodbye to a world which no longer needs him. Of questionable fortune, he finds a woman, Mercy, sitting alone on the shore at eventide. Nicolas is conflicted between an obligation to help, and annoyance at her intrusion.

Mercy has many layers of secrets. Deepest of all, she cannot tell this Child of Man she is thousands of years old and very powerful. In her presence, Nicolas’ own dormant powers begin to surface, triggering a sequence of events that cause both of their lives to spiral further out of control. When old friends from both sides come to help, together they all learn a painful truth: new life can only begin once you’ve set free what means the most.

Volume IV: Bound
Anasofiya Deschanel no longer knows who she is…or what. She longs both for what she has, and all she has left behind.

Aidrik the Wise has vowed to do anything for his evigbond. As he watches her life force slowly ebb, he begins to understand the sacrifice he must make to save her.

All three individuals are bound by love, promises, and the undeniable threads of fate.