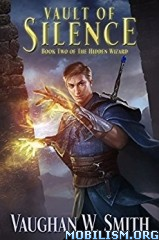 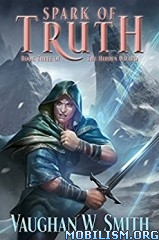 #2 – Vault of Silence
A fledgling wizard mastering his power. A fallen monk. A secret trial hidden in a desert temple.

Alrion barely survived. His success came at a terrible cost. Driven to improve his skill and prove his worth as a wizard he pushes on.

His dreams show him a vision of his next goal, the Vault of Silence. It is a secret trial guarded by an order of monks and designed to test a person’s will. To get there, he must find a guide and negotiate his way through sprawling cities and a vast desert.

But the creatures of the Blight are organising. They have a leader and have infiltrated the general population. To reach the Vault of Silence Alrion will need to make new allies, learn new spells and face an old foe. Can he rise again to the challenge? Or will he be crushed by overwhelming odds?

#3 – Spark of Truth
A wizard without his power. An infected weapons master. A race against time to find a cure.

Alrion has been infected by the Blight. His power is inaccessible and he needs a way to defend himself. He’s desperate to find a cure before he turns.

His hopes are pinned on a group of magic users known as Mystics. These women wield an unknown power that could be the missing link to curing the Blight. And saving himself.

Wraith has expanded his power and influence. Nowhere is safe, not even Alrion’s mind. It is only a matter of time until he falls to either Wraith or the infection growing within. If Alrion fails to find a cure, he will be transformed into his worst nightmare, and the world will be doomed to a future of darkness.