The Girl Who Knew Da Vinci by Belle Ami (Out of Time Thriller #1)
Requirements: ePUB Reader | 344 kb
Overview: In the spirit of The Da Vinci Code by Dan Brown and the Art Forger by B. A. Shapiro . . . The Girl Who Knew Da Vinci by Belle Ami unravels an unforgettable mystery.
Three destinies, one remarkable painting.
Will her visions lead her to the truth?
Art historian Angela Renatus, is haunted by dreams of Leonardo da Vinci and a mysterious painting of Giuliano Medici and his mistress Fioretta Gorini. A painting that, as far as the world knows, doesn’t exist. Compelled by her visions, Angela is determined to find out the truth.
When Angela is contacted by art detective Alex Caine, she’s shocked to learn that he too is seeking the same painting. Alex’s client, a wealthy German financier, is determined to clear the name of his late uncle, Gerard Jaeger, an art historian, who went missing in Florence, during World War II. In letters written before his disappearance, the historian describes his love affair with a beautiful young Italian woman named Sophia Caro and the discovery of an extraordinary painting by the great master himself-a painting depicting Giuliano and Fioretta.
Angela and Alex journey to Florence in search of the priceless treasure. Is it a lost da Vinci, potentially worth hundreds of millions of dollars, or a wild goose-chase that will only lead to a dead end? But someone else is searching for the elusive painting-Alberto Scordato is a powerful man in the art world and a sociopath who will stop at nothing to get what he wants, even murder. Scordato knows something about Angela that even she doesn’t know, something that could threaten both Angela and Alex’s lives, forcing them into the crosshairs of fate.
Genre: Mystery/Thriller/Suspense 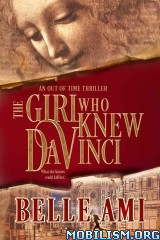