The Comic Novel MEGAPACK by Jay Franklin, Richard Wormser, John G. Schneider
Requirements: ePUB reader, 478 KB
Overview: Over the last few years, our MEGAPACK ebook series has grown to be our most popular endeavor. (Maybe it helps that we sometimes offer them as premiums to our mailing list!) One question we keep getting asked is, “Who’s the editor?”
The MEGAPACK ebook series (except where specifically credited) are a group effort. Everyone at Wildside works on them. This includes John Betancourt (me), Carla Coupe, Steve Coupe, Shawn Garrett, Helen McGee, Bonner Menking, Sam Cooper, Helen McGee and many of Wildside’s authors…who often suggest stories to include (and not just their own!)
Genre: Science Fiction & Fantasy 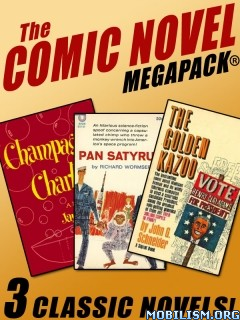 CHAMPAGNE CHARLIE by Jay Franklin: When Charles E. Hoskins wishes for champagne and it suddenly materializes, he finds that his powers of conjure extend to all intoxicants. In the many predicaments this provokes, Charles is committed into the hands of a psychiatrist, escapes, decides to open up a bar but runs afoul of the union and later of Treasury agents, is summoned by Washington and is wanted as a good will gesture by the British Ambassador, is taken by the Russians who are about to deport him….

PAN SATYRUS by Richard Wormser: The thirteenth chimp launched into orbit returns with the strange and sudden ability to speak…

THE GOLDEN KAZOO by John G. Schneider: The bestselling novel about Madison Avenue and its wildly hilarious captaign to elect a colorless candidate President, using the greatest vote-getting gimmick of them all!