The Ballet of the Planets: A Mathematician’s Musings on the Elegance of Planetary Motion by Donald Benson
Requirements: .ePUB reader, 20 MB
Overview: The Ballet of the Planets unravels the beautiful mystery of planetary motion, revealing how our understanding of astronomy evolved from Archimedes and Ptolemy to Copernicus, Kepler, and Newton. Mathematician Donald Benson shows that ancient theories of planetary motion were based on the assumptions that the Earth was the center of the universe and the planets moved in a uniform circular motion. Since ancient astronomers noted that occasionally a planet would exhibit retrograde motion—would seem to reverse its direction and move briefly westward—they concluded that the planets moved in epicyclic curves, circles with smaller interior loops, similar to the patterns of a child’s Spirograph. With the coming of the Copernican revolution, the retrograde motion was seen to be apparent rather than real, leading to the idea that the planets moved in ellipses. This laid the ground for Newton’s great achievement—integrating the concepts of astronomy and mechanics—which revealed not only how the planets moved, but also why. Throughout, Benson focuses on naked-eye astronomy, which makes it easy for the novice to grasp the work of these pioneers of astronomy.
Genre: Non-Fiction > Educational 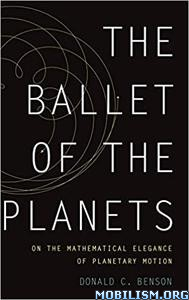