The American by Nadia Dalbuono (Leone Scamarcio #2)
Requirements: .ePUB reader, 467KB
Overview: As autumn sets in, the queues outside the soup kitchens of Rome are lengthening, and the people are taking to the piazzas, increasingly frustrated by the deepening economic crisis.

When Detective Leone Scamarcio is called to an apparent suicide on the Ponte Sant’Angelo, a stone’s throw from Vatican City, the dead man’s expensive suit suggests yet another businessman fallen on hard times. But Scamarcio is immediately troubled by similarities with the 1982 murder of Roberto Calvi, dubbed ‘God’s Banker’ because of his work for the Vatican Bank.

When, days later, a cardinal with links to the bank is killed, and the CIA send a couple of heavies to warn him off the case, Scamarcio knows he’s onto something big.

As disturbing connections between 9/11, America’s dirty wars, Vatican corruption, the Mafia, and Italy’s violence against its own people begin to emerge, Scamarcio is forced to deal with responsibilities far above his pay grade — in this tightly plotted mystery full of political intrigue.
Genre: Fiction > Mystery/Thriller 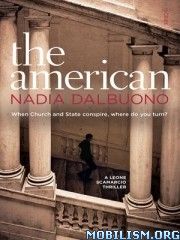