Bonds of Wool: The Pallium and Papal Power in the Middle Ages by Steven A. Schoenig
Requirements: .PDF reader, 4 MB
Overview: In the pallium the medieval papacy created a mechanism of control over the far-flung bishops of the Latin church, a prerogative by which the popes shared honor and power with local prelates―and simultaneously wielded power over them. Contributing to the sway and oversight of the Roman church, this vestment became part of the machinery of centralization that helped produce the high medieval papal monarchy.

The pallium was effective because it was a gift with strings attached. This band of white wool encircling the shoulders had been a papal insigne and liturgical vestment since late antiquity. It grew in prominence when the popes began to bestow it regularly on other bishops as a mark of distinction and a sign of their bond to the Roman church. Bonds of Wool analyzes how, through adroit manipulation, this gift came to function as an instrument of papal influence. It explores an abundant array of evidence from diverse genres―including chronicles and letters, saints’ lives and canonical collections, polemical treatises and liturgical commentaries, and hundreds of papal privileges―stretching from the eighth century to the thirteenth and representing nearly every region of Western Europe. These sources reveal that the papal conferral of the pallium was an occasion for intervening in local churches throughout the West and a means of examining, approving, and even disciplining key bishops, who were eventually required to request the pallium from Rome.
Genre: Non-Fiction > History 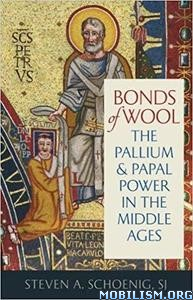