Slice by William Patterson
Requirements: EPUB Reader, 1.1 MB
Overview: Cut By Cut
When Jessie Clarkson left Sayer’s Brook, Connecticut, she was pregnant, terrified, and married to a psychopath. She knew Emil would do anything to prevent her incriminating him—if he ever found her. Staying alive for the sake of her child was all that mattered.
Inch By Inch
Five years later, Emil is dead and Jessie is ready to stop running. With her daughter Abby starting school, going home to be among friends and family makes sense. Until the murders start. All the victims are viciously stabbed and slashed across the throat. And each of them has a connection to Jessie.
He’s Getting Close Enough To Kill
Is Emil still alive, tracking her down—or do the answers lie elsewhere in her troubled past? One horrifying crime at a time, a killer is making his intentions clear. Jessie may have escaped Sayer’s Brook once. But someone is making sure she never leaves again…
Genre: Thriller 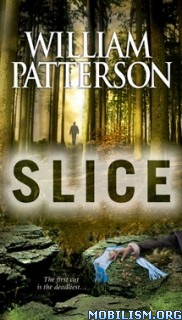