Runaway by Ed McBain (Richard Marsten)
Requirements: ePUB Reader, 826 kB
Overview: A young black man is framed by the police for a murder he didn’t commit in this gritty New York crime story from the author of the 87th Precinct series.

Johnny Lane is outside the Apollo when he sees Luis, and rage floods his veins. Every tough in Harlem knows that Luis tried to rape Johnny’s girl, and that means he has to die. Johnny comes out swinging, but Luis is wearing brass knuckles, and he almost kills Johnny before the fight gets broken up. A few weeks later, as a brutal winter settles over New York, Johnny is walking down the street when he hears the gunfire. Luis has been shot dead.

Johnny runs without thinking, because it’s bad news for a black man to get caught near a corpse, but the cops catch up with him anyway. He didn’t shoot Luis, but he had a motive, and that’s good enough for the New York Police Department. Cornered, alone, and helpless, Johnny has no choice but to find the real killer—or spend the rest of his life on the run from the cops, his friends, and his girl.

A hardboiled story of a friendless man hunted by the police, Runaway is vintage Ed McBain. It’s a story of life on the margins of a merciless city, from an author who knew the dark side of New York better than anyone.
Genre: Mystery 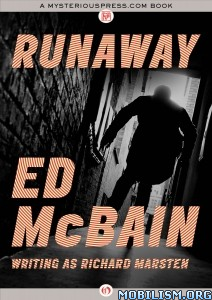