Rites of Burial by Tom Jackman , troy cole
Requirements: .ePUB reader, 1.6 MB
Overview: RITES OF BURIAL tells the gruesome story of Robert Berdella, a serial killer whose inhuman crimes of murder and dismemberment might have served to inspire Jeffrey Damer’s Milwaukee slaughter. When local police searched Berdella’s home they found human skulls, an envelope of teeth, and hundreds of pictures of young men being raped and tortured. Then, acting on a hunch, they dug up his yard to find a partially decomposed human head. Berdella later confessed to kidnapping six young men over a four-year period, forcing them to endure sadistic torture and rage, then killing them, cutting up their bodies and putting the remains in garbage bags to be collected by local garbage men. Pleading guilty after police discovered evidence too hideous to imagine, Robert Berdella was sentenced to life without parole
Genre: Non-Fiction > Biographies & Memoirs 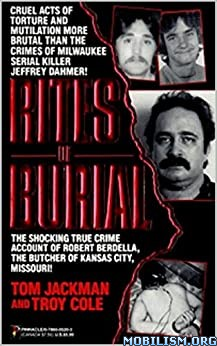