Renewable energy in power systems By Leon Freris, David Infield
Requirements: .PDF reader, 7 MB
Overview: Renewable Energy (RE) sources differ from conventional sources in that, generally they cannot be scheduled, they are much smaller than conventional power stations and are often connected to the electricity distribution system rather than the transmission system. The integration of such time variable ‘distributed’ or ‘embedded’ sources into electricity networks requires special consideration. This new book addresses these special issues and covers the following: The characteristics of conventional and RE generators with particular reference to the variable nature of RE from wind, solar, small hydro and marine sources over time scales ranging from seconds to months The power balance and frequency stability in a network with increasing inputs from variable sources and the technical and economic implications of increased penetration from such sources with special reference to demand side management The conversion of energy into electricity from RE sources and the type and characteristics of generators used The requirement to condition the power from RE sources and the type and mode of operation of the power electronic converters used to interface such generators to the grid The flow of power over networks supplied from conventional plus RE sources with particular reference to voltage control and protection The economics and trading of ‘green’ electricity in national and international deregulated markets The expected developments in RE technology and the future shape of power systems where the penetration from RE sources is large and where substantial operational and control benefits will be derived from extensive use of power electronic interfaces and controllers The text is designed to be intelligible to readers who have little previous knowledge of electrical engineering. The more analytical electrical aspects are relegated to an Appendix for readers who wish to gain a more in depth understanding. The book’s flexible structure makes its accessible to the general engineer or scientists but also caters for readers with a non-scientific background. Economists, planners and environmental specialists will find parts of the book informative.
Genre: Non-Fiction > Educational 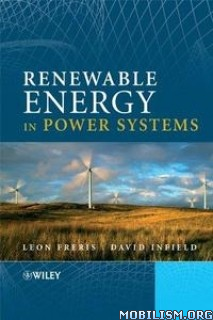