Red Mist Feral: Part five of the Red Mist series by R T Green
Requirements: .ePUB reader, 478 KB
Overview: In the midst of a terror threat unlike anything London has seen before, an MI6 shadow assassin and a terrorist fall into a dangerous, unstoppable love. But as their lives spiral out of control, it becomes clear the horror looming over the capital’s population is just the start of their epic journey. When hearts and jealousy collide, the war against the evil Tiri and her compatriots will not be the only battle they have to fight. The Red Mist series is Madeline and Zana’s story.

‘Feral’ is part five of the series…

Arriving home and thrown straight into the new threat, as Zana says… ‘I am quaking in my boots because of a gang of teenagers, Madeline. Can things get any worse?’

The evil Arik made sure he fathered a son before he died at Madeline’s hands. So did the other six men who originally came to Earth. Grown into teenagers far quicker than normal, these half-human half-Calanduran mutant ferals possess enhanced abilities, and similar desires to their fathers. But even worse, they are being helped by an unknown wealthy and powerful human, who only has his own global interests at heart.

One of the other ferals, Cara, is rapidly becoming an unstable time-bomb, and together this modern-day ‘Bonnie and Clyde’ turn into a major threat to London and the rest of the world.
Zana blames herself, and is only too happy to go with Duncan Scott’s suggestion and put herself in mortal danger in order for DIAL to discover the feral’s location.

But for Madeline, if Zana putting her life at risk is not hard enough, there is another threat she has to eliminate… and that particular war of the worlds is much closer to home.
Genre: Fiction > Sci-Fi/Fantasy FF 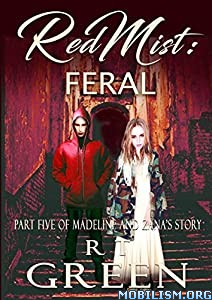