Nirvana: A Tour Diary: My Life on the Road with One of the Greatest Bands of All Time by Andy Bollen.
Requirements: PDF Reader, 7 MB.
Overview: Afforded the kind of access a journalist can only dream of, Andy Bollen gives fans a new story focusing on the real Kurt Cobain—not the angst-ridden, troubled rock star of folklore, the kind and humorous Kurt the world seldom saw

When Nirvana first exploded onto the music scene in 1991, few people could have predicted their subsequent global impact, or that the band’s lead singer Kurt Cobain would be transformed into one of music’s most enduring and iconic figures. As drummer for the British group Captain America, one of the two support bands on Nirvana’s Nevermind UK tour, Andy Bollen had a ringside seat at the exact moment that Nirvana went massive. Afforded intimate access, Bollen wrote his own personal diary in Nirvana’s dressing room, where he spoke candidly to Cobain—from his fears of losing original fans to his love of the Bay City Rollers. He saw firsthand how Nirvana worked, the relationships that made them tick, and the dynamic that made them one of the great bands. This is a warm, affectionate, funny, and, at times, brutally honest account, written by a guy on the periphery, perfectly positioned to observe. Drawing on the diaries he kept at the time, the book brings to life a pivotal moment in rock history, making it a must-read for Nirvana fans and lovers of iconic rock stories. The author also includes his own photographs which have never been seen before. 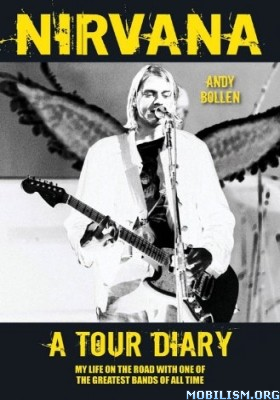 Nirvana: A Tour Diary: My Life on the Road with One of the Greatest Bands of All Time

Bollen was the drummer for the Scottish rock band Captain America, one of the support bands on Nirvana’s winter 1991 Nevermind tour of the UK. From Edinburgh and Glasgow to Manchester and London, Bollen was there. A Scot from Airdrie (a small town outside Glasgow), the author is a likable fly on the wall as he ends up touring with the hottest group on the planet—and all by accident. His friends in the band needed a drummer—and fast. Bollen considered himself more a journalist than a musician, but he was game despite being “shy” and “self-conscious.” He recalls the first time he sees Nirvana and finds the band members surprisingly “amiable and approachable.” Bollen’s anecdotes about life on the road with the soon-to-be-famous members of Nirvana are both fun and insightful. Cobain, he writes, spent most of his time either sleeping or writing letters and making journal entries. Even though he had “a persona that made people wary of him,” Bollen recalls that Cobain was generous with fans, making them feel at ease. He learns too that Cobain had a soft spot for the much-maligned Scottish bubblegum band, the Bay City Rollers. A charming and unusual inside look at one of the most iconic bands in rock history. Nirvana fans will love it.

Download Instructions:
http://corneey.com/wLYESw — Nirvana: A Tour Diary: My Life on the Road with One of the Greatest Bands of All Time (2013)