Monster Tamer Series Complete by Isaac Hooke
Requirements: .M4A/.M4B reader, 3gb
Overview: Three women. One man. A whole lot of monsters.
Malem is a Breaker. He breaks the minds of beasts, exerting the steel vise of his will over their own, bending them to his wishes.
His ability is severely limited in terms of the types of creatures he can control, and how many. Most monsters have always been beyond him.
Genre: Audiobooks > Fiction 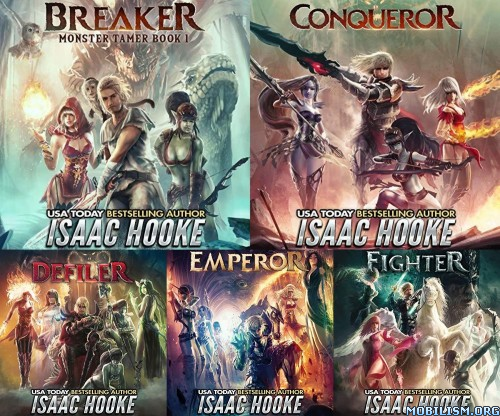 One day Malem accidentally breaks a monster girl. Doors begin to open for him faster than he thought possible…
Note: this book contains harem elements. The main character certainly isn’t shy around women, and the magic system is unique in ways you might not expect. Also, the story can get a tad dark in places.

Malem has joined the forces of good and wages war against the vast host of Vorgon, the Balor who has come to destroy the world.
Malem has four beautiful women fighting at his side, one of them a former general of Vorgon’s army–a night elf tamed by his unique skill. He also has a few hill giants and other monsters ready to follow him to the gates of hell itself.
But it’s not enough. The army of Vorgon stands poised to defeat the defenders. Despite Malem’s powers, and the unique magic and abilities his lovely companions bring to the table, the enemy has the advantage when it comes to sheer numbers: Vorgon’s host stretches from horizon to horizon as far as the eye can see, painting the fields black.
Worst of all, he’s still hunted by the Darkness: a curse laid upon him by Vorgon’s predecessor. Its ghostly hands are always trying to drag him down to the underworld at the worst of times.
He’s been running from the Darkness his entire life.
But now, with the fate of the world hanging in the balance, that running must stop.

The Darkness has taken Malem. The Breaker fights for Vorgon now.
But that doesn’t mean Malem is going to let anyone harm the five women he’s bound to. They give him the power to control monsters, after all. Besides, they’re super hot.
Vorgon doesn’t like the devotion Malem shows his women, so the evil demon decides to send him on a fool’s errand—-his mission is to infiltrate the kingdom of the Tree Elves and Break their queen. No easy task, given that she is surrounded by an army of bloodthirsty fighters and merciless mages, not to mention a crapload of monsters.
This errand might just backfire on Vorgon, however, because if Malem succeeds, he will grow in power far beyond anything the demon ever dreamed of…

Malem’s back, and he’s free of Vorgon and all things demon.
It’s time to enjoy the fruits of his labor. His newly acquired army is building a city for him and his companions in the forest. He hasn’t figured out how he’s going to pay his soldiers, but he’s confident things will work out: he has a few princesses and queens serving on his personal advisory board, after all, and they have some experience in nation building (among other special talents).
He also has a couple of new women who’ve recently joined his team, and they need to be brought up to speed, in more ways than one.
But it isn’t all fun and games in the Kingdom of Malem. Building a new city in the heart of monster territory is bound to attract some attention, and not the good kind. So when he faces a large-scale attack from an unknown enemy, it doesn’t really come as a surprise.
To stave off this latest threat, Malem must once more don his Breaker’s hat and return to the fray with his lovely companions.
Featuring hot women, ugly monsters, a good old-fashioned dungeon crawl, and a massive battle between armies.

Malem is emperor. He has an army of monsters at his command, and a harem of beautiful women at his beck and call. He should be happy. And yet he is restless.
He yearns for the nomadic existence he left behind… the laid-back days spent roaming the countryside, sleeping under the stars, free of the burdens of rule. Careful what you wish for…
When an old friend flees Malem’s kingdom, bringing with him the secret to escaping the demon that binds Malem forever, our restless emperor must pursue.
Unfortunately, this particular friend is not what he seems, and when Malem finally catches him, the man might just bring Malem’s world crashing down around him. Quite literally.
Sometimes, even emperors have bad days.