Marigold by Heather Mitchell Manheim
Requirements: .ePUB reader, 368 KB
Overview: As the decimated population of New United State rebuilds itself after a deadly pandemic, Davis has to decide what is real and what is fake after she is suddenly kidnapped. She has been kept away from her work, and more importantly, the Marigold injection that is vital for survival. She is torn in different directions when she finds herself in a secret bunker and is asked to complete a task that seems impossible. As she grapples with knowing who she can trust, she must choose the path that is not only right for her but also for the country that is repairing itself. She does not know if she should believe what her kidnappers have told her about the corruption prevalent in the new government, or if the government she has always trusted deserves her faith. Davis has always had her every need tended to by the government, so questioning them never entered her mind before she arrived at the bunker. As her days in captivity wane on, she becomes enmeshed in the lives of the kidnappers: Quinn, Namaguchi, Ringo, and, in particular, the handsome Brookshire — whom she last saw in school several years ago — and things become even more complicated for her.
Genre: Fiction > Sci-Fi/Fantasy 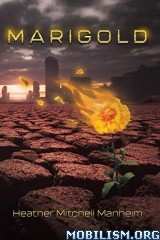