M551 Sheridan in Action – Armor Number 28 by Jim Mesko
Requirements: .PDF reader, 58 MB
Overview: Although the Army was generally satisfied with the M41 Walker Bulldog tank, it was decided during late 1952 to begin development of a new vehicle to fill an Army require­ment for an air transportable/deployable light tank. While the M41 was capable of being carried by existing transport aircraft it was not capable of being dropped by para­chute.

The Korean War had underscored the need for the Army to be able to rapidly deploy forces to trouble spots on a moments notice. To meet this requirement a lighter, smaller tank that could be airlifted into combat was needed. While efforts were made late in the M41’s production run to upgrade its armament nothing could be done to reduce its overall weight and size. This led to the Army’s decision to develop a totally new ve­hicle…
Genre: Non-Fiction > History 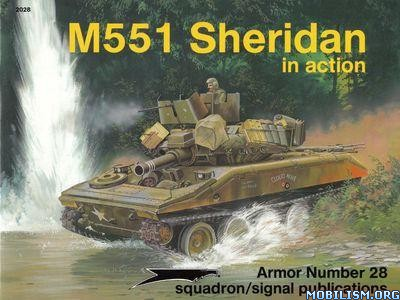