Lunar Pack Series by Rosa Swann (Boxset 1-3, book 4)
Requirements: ePUB Reader, 317 kB
Overview: Rosa is an idealist, she believes that everyone deserves happiness, even those who think that they are too broken to be loved. So, she writes stories with imperfect people who fall in love with other imperfect people and will fight together to make it work. Because happiness is not in perfection, but in finding someone to share your life with, all the good and the (angsty) bad. When not writing, you can find her playing videogames, curled up under a blanket with a book or teasing her two adorable cats.
Genre: Fiction > Romance Paranormal MM 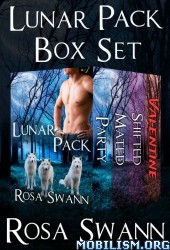 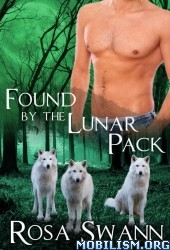 Roy never thought that one party with his sexy new neighbours would turn his whole life upside down!

Party at the Lunar Pack (Lunar Pack #1)
Roy’s life exists of work, dinner and sleep, boring. His friends are getting married, or having kids, and he sits home alone, too focused on his job to have much of a social life, let alone a love life.
Then he finds a letter on the doormat, an invitation to a housewarming party next door. There he meets Clyde and Sam, they seem interested in him as more than just neighbours, and definitely ready to explore if that interest is mutual.
But why does he feel like there is more going on between the three of them? And why are Clyde and Sam acting all weird the next morning?
A 8500 word long story about a man who realises that behind his neighbours’ sexy looks, is a whole world he didn’t know about.

Mated by the Lunar Pack (Lunar Pack #2)
Clyde hurts when his pack hurts, when his lover hurts, but is this dark pain proof of something more, something deeper?
Clyde is the Alpha of the Lunar pack, the leader, the one in charge. But when his lover, Sam, turns their sexy next door neighbour, Roy, into one of them during a hot night of passion, he has trouble keeping everything together.
After finding out about the turn, three weeks ago, Roy has been refusing to have any contact with them. In turn Sam has become restless, moody and racked with guild. It pains him to see the heartbreak his lover is going through and he decides this can’t go on any longer.
To make matters worse, the moon will be full in three more days, and unless he doesn’t do something soon, Roy will go through his first shift as a werewolf alone. No matter their unusual circumstances, he can’t let that happen.
Will he be able to finally reach Roy and explain to him why Sam did what he did? And, more importantly, will Roy understand the repercussions of Sam’s mistake?
A 7000 word story about an Alpha trying to protect the ones he loves, even against all odds.

Shifted at the Lunar Pack (Lunar Pack #3)
Felix has always been very close with Sam and Clyde, will the addition of Roy change anything?
Felix expects to spend spend the full moon with his two best friends, his pack mates, like he does every month. What he doesn’t expect is to find Sam with another man, Roy, and for Clyde to be away from home.
When he hears what happened between Sam and Roy and why Clyde won’t be joining them that evening, he is furious. At the same time, it also emphasises how he is still alone.
It’s the evening of the full moon, the first full moon for Roy. Tonight will tell if he really is mated to Clyde and Sam. If he can get over the hurdle of his first change, that is.
Felix isn’t happy that his friends didn’t tell him what was going on, but that doesn’t stop him from helping a new werewolf change for the first time.
Is Roy really fated to Clyde and Sam? And will there still be a place for Felix in their lives?
A 6000 word long story about a man who helps his friends go through a scary part of their lives.

Valentine at the Lunar Pack (Lunar Pack #Extra)
Sam doesn’t feel like going home this Valentine’s Day. This will be the first time in years he won’t spend it with his lover, and Alpha of the pack, Clyde, and his new lover, Roy, hasn’t shown any clues that he has something planned either.

Found by the Lunar Pack (Lunar Pack #4)
Jasper lives by four rules: No kissing, no cuddling, no feelings… and never getting hurt again.
Every full moon, Jasper runs away from the packs. He’s a stray, a loner, a werewolf without a pack. Caught by an Alpha while trespassing on his territory, Jasper is suddenly saved by a wolf he doesn’t know, for reasons he cannot understand.
When he wakes up the next morning beside a man named Felix, Jasper’s confusion has only just begun, and it deepens when they bump into Milo at the local coffee place.
Three men, one night at a club, it was supposed to be some innocent fun. But it soon turns out that his rules, and maybe even his heart, are on the line.