Jordinia Series by C.K. Brooke (1~2)
Requirements: ePub, Mobi or PDF Reader, 14.2 mb
Overview: C.K. Brooke is an award-winning, Amazon bestselling author of over a dozen romance and fantasy novels and novellas. Her debut novel, THE DUCHESS QUEST, was selected by Shelf Unbound Magazine as a Top 100 Notable Indie Book of 2015, and her YA novel, SECRETS OF ARTEMIS, received the Indie B.R.A.G. Medallion Award in 2017. She is also the author of THE WRONG PRINCE (48fourteen, 2016), a Global EBook Award Honorable Mention title, as well as the historical romance, CAPTURING THE CAPTAIN (Limitless, 2016), which was a RONE Award Nominee and a Finalist in the Mid-Michigan RWA Best Banter Contest. She lives in Washington, Michigan with her husband and son.
Genre: Romance > Fantasy 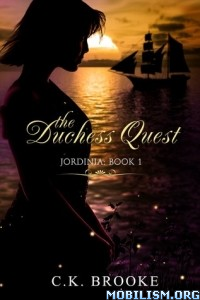 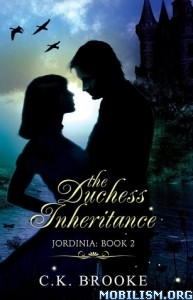 1. The Duchess Quest
Love is destined to find her…
Dainy doesn’t know that she is the lost duchess of Jordinia, or that her uncle has organized a contest to seek her, offering her marriage hand as the reward!
Though at odds, three clashing rivals – a noble giant, a forester, and a thief – voyage together by woodland, plains, and sea to recover the lost royal, notwithstanding assassins and spies at their tail. Soon, Dainy is swept into a comically complex romantic triangle as her suitors compete to capture her heart.
Charmingly romantic and bursting with action, startling twists, and vivid characters, fans of Anastasia and The Princess Bride will adore this original yet timeless tale of swashbuckling adventure and unlikely love.

2. The Duchess Inheritance
Her inheritance awaits…but is it what she expects? Dainy Ducelle possesses only one clue to her hidden inheritance. Accompanied by her loyal companions – Mac, Jon and Bos – the young woman embarks upon another riveting quest, braving pirates, desert thieves and mountain gales through the exotic nations of the Great Continent to seek her royal fortune. But when her unusual treasure is finally uncovered, the former duchess gains the sudden potential to become a future empress. Thus ensues the battle to reclaim Jordinia in C.K. Brooke’s gripping sequel to The Duchess Quest (Jordinia: Book 1). Wrought with harrowing adventure and deepening romance, war is waged while love is lost and found in this epic conclusion to the tale of Jordinia.